Mills: Gayle will be desperate for January Newcastle exit 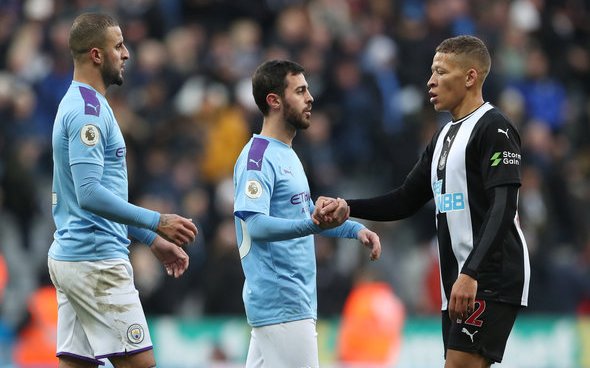 The 29-year-old is yet to start a competitive game for the Magpies since returning from a loan spell with West Bromwich Albion last campaign. Sky Sports pundit Mills feels that the frontman may well be looking to leave in January as a result.

“I’ve been surprised [by his lack of minutes], he has done so well in the Championship, I don’t think they wanted him to go out on loan,” he told Football Insider.

“Steve Bruce likes him but he hasn’t really been given an opportunity, especially when your centre-forward has hardly scored. So he’ll be one knocking on the manager’s door, saying ‘play me or let me leave’.”

It’s true that Gayle hasn’t played much. He has made just four appearances off the substitute’s bench for a combined 43 minutes of action this term [Source: Transfermarkt], so he will undoubtedly be frustrated by his current plight. Having said that, he was out until October with an injury, and so he’s not actually been available for that long. During the time he has been available for selection, Steve Bruce has clearly deemed him not ready to start. Whether that’s a fitness or a tactical thing we don’t know. Andy Carroll starting ahead of both Joelinton and Gayle against Sheffield United on Thursday night will have been the real kick in the teeth for the former Crystal Palace man. You assumed that when Bruce was ready to drop the Brazilian it would be Gayle who’d replace him in the starting line-up. Thursday, though, demonstrated the folly of that line of thinking. Now that the striker is seemingly third choice at St James’ Park, he may well be looking to leave next month.