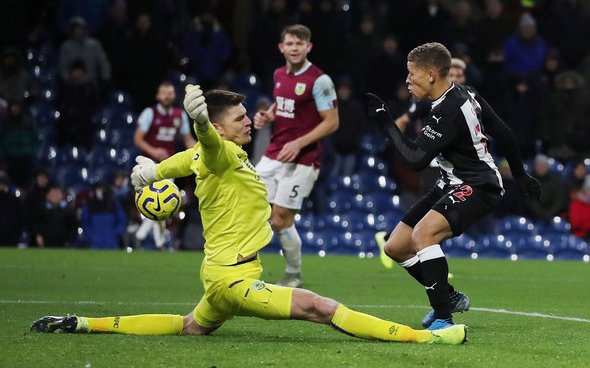 Veteran Newcastle United correspondent John Gibson has launched an attack on the club’s attackers after the Magpies’ 1-0 defeat to Burnley on Saturday.

Steve Bruce’s side struggled to create chances without Jonjo Shelvey, Miguel Almiron and Allan Saint-Maximin, and Gibson feels a lack of firepower could be the team’s undoing this season.

“Andy Carroll, Joelinton, Dwight Gayle, and Yoshi Muto became not the fab four but flop four with harsh facts returning to haunt Geordies,” he wrote on The Chronicle website.

“Gayle, looked upon as the most natural finisher of them all though perhaps more in the Championship than the Premier League, had the best opportunity but blew it.”

You can’t really argue with Gibson’s verdict on Saturday’s defeat. It was a limp, lacklustre effort from a Newcastle side missing some of the star players who have inspired them to a string of positive results in recent weeks. The two big losses were Shelvey and Saint-Maximin, both missing through injury. The former has been in fantastic goalscoring form, and appears to have relished the opportunity to step into Jamaal Lascelles’ shoes at Newcastle captain. Saint-Maximin, meanwhile, is the unpredictable livewire who arguably gives opposition defenders more headaches than the rest of the Magpies’ attackers combined. It certainly looked like that at Turf Moor, where Carroll and Joelinton toiled in attack, and Muto and Gayle were wasteful off the substitute’s bench. This was a dispiriting result for Bruce’s team, and has probably given the Newcastle boss some food for thought heading into the January transfer window. Gayle out and a new striker in? Maybe, just maybe.