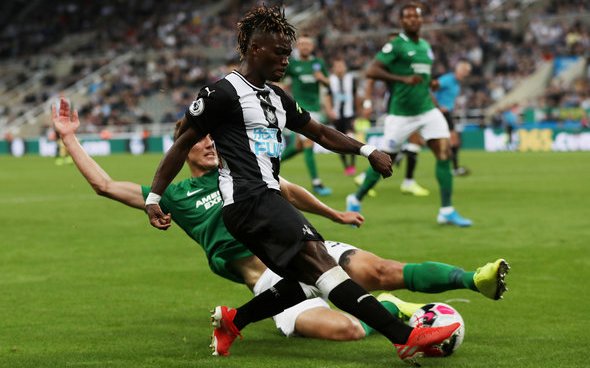 The Frenchman had to leave Sunday’s 2-1 victory over Southampton on crutches, and Sky Sports News reported on Wednesday that he will be out for a month with the hamstring problem.

Douglas, though, thinks Atsu will do fine in his stead: “Christian Atsu might not offer the same electricity as Allan Saint-Maximin but the winger has not let anyone down when he’s been involved,” he wrote on The Chronicle website.

“At Spurs he set up Joelinton’s only goal of the season and he offers pace and purpose when he’s on his game. A straight swap is probably the best bet for Saturday – with Andy Carroll replacing Joelinton.”

Atsu is the obvious replacement to come in and replace Saint-Maximin, as he did when the former Nice man went down injured against Tottenham Hotspur earlier this season. The problem is that the Ghana international hasn’t started a game since September. Yes, he’s not let anyone down, but he’s only really being brought on for the closing minutes of games at the moment. The 27-year-old hasn’t played more than 13 minutes since that last start against Leicester City in September [Source: Transfermarkt]. So he’s likely going to be a bit rusty at first, while his form when he has played this campaign has been indifferent at best. Yes, he’s got three assists so far despite his lack of recent game time, but he’s only averaging 0.4 shots, 0.8 key passes and one successful dribble per game [Source: WhoScored.com]. It’s a weird one, but Steve Bruce doesn’t really have many other options to replace Saint-Maximin. He could move Joelinton out wide, perhaps, but Atsu feels like the safer bet.