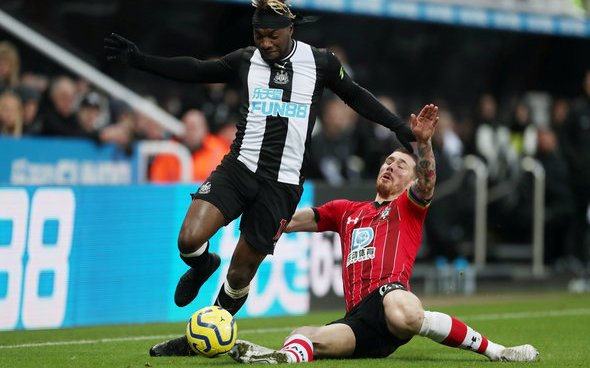 Newcastle United duo Ciaran Clark and Allan Saint-Maximin are both doubts for Saturday’s trip to Burnley, according to Chronicle journalist Lee Ryder.

Writing on the newspaper’s website, the Magpies correspondent claimed that both players’ statuses for the weekend are up in the air after picking up knocks against Southampton on Sunday.

The Republic of Ireland international suffered a calf injury against the Saints and had to be withdrawn at half-time. Saint-Maximin, meanwhile, sustained a hamstring problem.

Ryder’s own admission is that Clark is in ‘much better shape’ than the Frenchman.

This is genuinely quite a big setback for Newcastle. Clark and Saint-Maximin have been two of the players who have been most important in their recent upswing in form under Steve Bruce. The defender has been a colossus at the back of late, so much so that the fit-again Fabian Schar hasn’t been able to get in the team ahead of him, Federico Fernandez or Paul Dummett. Saint-Maximin, meanwhile, has been the creative spark plug the team was missing for the first month or so of the campaign. The former Nice man’s influence has been absolutely massive, driving opposition defences mad with his pace, trickery and unpredictability. The good thing for Bruce, though, is that he has good options to replace the pair. Schar and Florian Lejeune are both available to come in for Clark, while Christian Atsu is the obvious one to step in for Saint-Maximin. In the latter case it’s certainly not a like-for-like replacement, but it will do for now.