Bruce: Joelinton must learn from Carroll

The England international took the Brazilian’s place in the win over Sheffield United last mid-week, but saw the 23-year-old replace him in the victory over Southampton on Sunday.

Bruce has been discussing the duo: “It’s that confidence one with him,” he said of the Brazilian, as per the Shields Gazette. “He’s got to learn from big Andy.

“He’s new into the Premier League and is only young, and, of course, a lot of things get labelled at him with the big price tag. I’m still convinced he’ll be a big asset to us. He’s learning, and like everyone who comes to the Premier League, he’s finding it’s not easy.”

We need to start seeing tangible signs of progress from Joelinton now. Yes, he’s a young player who is new to the Premier League so of course he’s not going to be firing on all cylinders right away. The £40million price tag hasn’t helped him in any way, shape or form. However, he should be doing much better than he is. It’s alright saying he needs to learn from Carroll, but he should have been doing that already. All you have to do is look at Sunday’s game and see the difference the former West Ham United man made when he came on to know that the Brazilian still has a long way to go. The statistics prove as much, too. As per WhoScored.com, Carroll already has more assists than Joelinton, while he is being dispossessed less and having fewer unsuccessful touches. To the former Hoffenheim man’s credit, he is averaging more shots, key passes and successful dribbles per game, but the eye test is letting him down. Newcastle simply look like a better team with Carroll on the pitch at the moment. 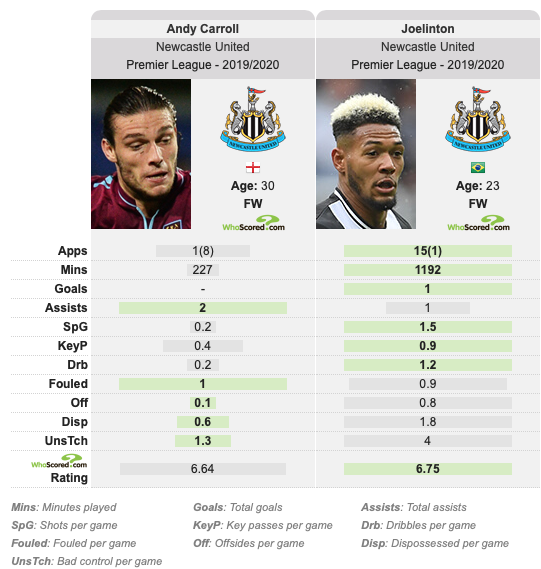