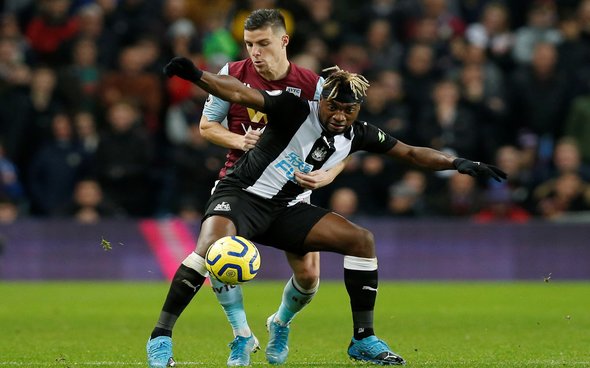 Following the disappointing 2-0 defeat to Aston Villa there aren’t many positives for Newcastle fans to cling to.

However, talkSPORT host, Laura Woods managed to offer a positive thought for many Newcastle supporters to cling to when it comes to the potential of winger Allan Saint-Maximin.

Woods suggested that the Magpies winger could be a real player if he sorted out his end product and even compared him to how Wolves’ Adama Traore previously used to be.

The presenter then added that perhaps it may just take a season or some coaching for Saint-Maximin to start proving that he can make the most of his talents.

“There are comparisons there with Adama Traore who lacked that end product but now he has found his way.

There’s no denying that the Frenchman is an exciting talent as he even managed to impress Chris Sutton despite his side slumping to a 2-0 defeat to Villa on Monday.

Saint-Maximin has impressed by going on dazzling, skilful runs, which also shows off his pace, with him averaging an impressive 3.8 dribbles per game across his nine league outings. (Source: WhoScored)

These dazzling runs see Saint-Maximin not only fluster his opponents but see him get in goalscoring positions after all he has averaged 1.7 shots per match.

However, the downside of the 22-year-old’s talents is that he often ends up with nothing to show for his efforts.

For example, not only has Saint-Maximin yet to score or a goal or register an assist for Steve Bruce’s side, but only 75.2% of his passes find the mark and on averaged he has been dispossessed a dismal 1.8 times per match.

Yet if Woods is right to claim that it is only a matter of time, this is his first season in the Premier League, or some coaching that sees Saint-Maximin become more a complete player, then many Newcastle fans will cling to those remarks as that’s an exciting prospect.

Especially if he can transform like Traore has for Wolves.

The Spanish winger was previously criticised for his lack of end product but he has been a menace this season as he has already racked up two goals and registered three assists to aid his side.

So with that in mind, the thought of Saint-Maximin potentially being able to improve and make the most of his talents, at least it will cheer up some glum faces after Monday’s loss.