Carragher claims Almiron should be axed 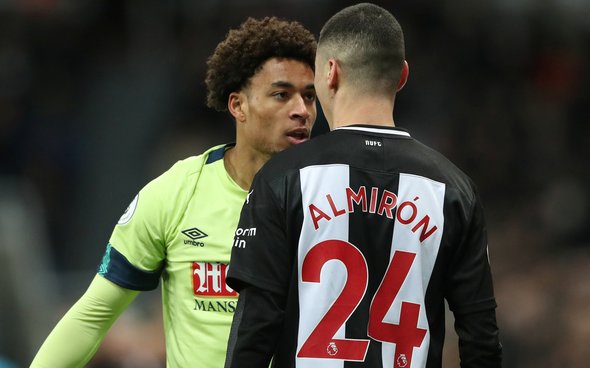 The Sky Sports pundit claimed that with the Magpies attacker still not registering a goal or an assist then it was time for him to come out of the team.

Carragher admitted he felt a bit sorry for Almiron but then shared that it’s getting to the stage where people should be worried about whether the Paraguayan has enough quality to play in the Premier League.

“I do think now, it’s come to the stage with Almiron has to come out of the team,” said Carragher on Monday Night Football (Sky Sports Football, 22:26, Monday, November 25th).

“Because he hasn’t scored or created in how many games? 23. And I actually in some ways feel a little bit sorry for him.

“I did feel that last year as I thought he was trying too hard but now we’re getting to the stage where you’re worried if there’s enough quality there really for him to be in this team and in the Premier League.

“He had a tough start with a new manager coming in at the start of the season, but not to get a goal or an assist as an attacking player, I think it maybe it’s time for him to come out.”

Ouch. Almiron surely is going to have to take this criticism to heart as it’s rather harsh despite Carragher clearly sympathising with the attacker’s struggles. After all not only does Carragher call for the 25-year-old to be axed, but he suggests that the attacker may not be Premier League quality and that in turn implies he may never come good at St James Park. No one can fault Almiron’s work effort, but Carragher might be right to sound the alarm bells over the attacker.  The 25-year-old hasn’t registered an assist or goal in 1083 minutes, as per Transfermarkt, of Premier League action this season, so keeping the faith in him by constantly playing him isn’t seeing his luck change. So maybe him dropping out of the team for a few days, may do the trick. After all, a break from being in the firing-line may work in his favour as wouldn’t it be so typically Newcastle if they took Almiron out of the team, only for him to be a goal machine upon being thrown back in.