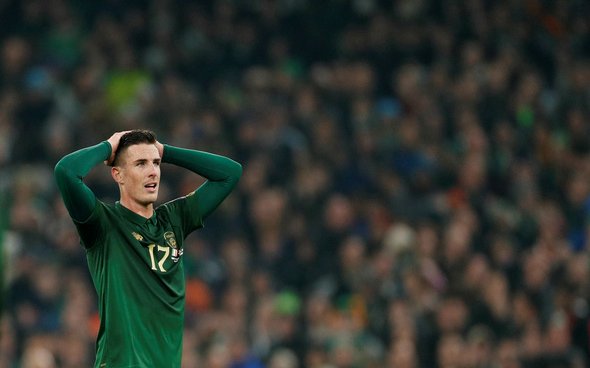 Liam Brady slammed Newcastle United defender Ciaran Clark while he was playing for the Republic of Ireland in their 1-1 draw with Denmark on Monday.

The RTE Sport pundit was told that the Magpies enforcer was replacing John Egan at the break due to the Sheffield United defender suffering an injury and proceeded to suggest it was a “blow” that Clark was on the pitch.

Brady hesitated before directly saying that Clark had a mistake in him, which showed his displeasure at Mick McCarthy opting to utilise the Newcastle centre-back.

“This is a blow ….eh, Ciarán Clark, I don’t, you know, wish to … eh, but [laughs nervously] sometimes there’s a mistake in him,” said Brady on RTE Sport during Ireland’s 1-1 draw with Denmark, as transcribed by the Irish Times.

Clark didn’t exactly do anything wrong while representing his nation and in hindsight, Brady surely will regret questioning the centre-back’s ability. The 30-year-old centre-back may have previously made mistakes while representing Ireland, but that shouldn’t be held against him. Clark has been in phenomenal form for the Magpies this season and there was no reason to suggest he couldn’t deliver the goods for his nation when called upon on Monday. The experienced centre-back has been a defensive rock for Steve Bruce’s side this season as he has averaged 1.4 tackles and 5.4 clearances per game across his five Premier League outings, as per WhoScored, and has even been an asset in the box as he has racked up two goals. In fact, Clark is currently the Magpies’ joint top-scorer for the season, and while it isn’t his job to score when you consider that, maybe Brady should be more respectable when it comes to what the defender can offer his nation.