Joe White has put pen to paper on his first professional contract with Newcastle United.

The club confirmed the deal on Monday afternoon.

The 17-year-old midfielder is highly-rated by the Toon Army’s youth setup, and has already played for their U23s. 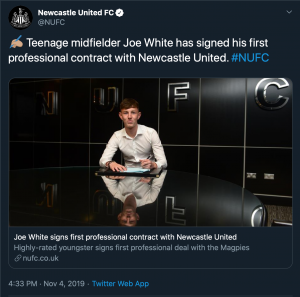 This feels like a really positive move from Newcastle. Not only have they had great success in recent times with bringing through young midfielders – see the Longstaff brothers for proof – but they have also tied down a player who has the potential to go all the way to the professional game. This is a young player who has been compared to Mesut Ozil in the past, as per the Chronicle, and who names his idols as Kevin de Bruyne and Zinedine Zidane, as per the article announcing this deal. Those are not players you take about unless you mean serious business, and the hope will be that White can continue at his impressive rate of progress and eventually follow in the footsteps of the aforementioned Longstaffs into the first team. He already has U23 experience, and all the signs are really, really promising.