One of the strong points of Newcastle United’s start to the season has been their defence.

Steve Bruce has been blessed to have so many options in the heart of defence, meaning some noticeable absences have gone under-the-radar in the North East.

Federico Fernandez and Ciaran Clark were in the shadows at the beginning of the season but injuries to Fabian Schar and Jamaal Lascelles gave them the opportunity they were craving.

Both have scored in vital wins and would find themselves disappointed to be taken out of their side, especially the South American who will be looking to impress.

The Chronicle recently reported that the Magpies were yet to open talks with Fernandez over a new contract despite his current deal due to expire at the end of this season.

The newspaper claim on their website that the Argentine has not held any discussions despite becoming a mainstay in Bruce’s side in the last couple of months.

Fernandez could be in danger of leaving St James’ Park in the summer, with fresh transfer links springing up over potential defenders that could join the club.

It has been reported on Thursday by the Chronicle that the Magpies are keeping tabs on Leeds United loanee Ben White over a potential move at the end of the season.

The Brighton defender has also attracted interest from Manchester United and Liverpool and is rated at £20million by the Seagulls.

Given the interest in White, it could spell massive danger for Fernandez and his time as a Newcastle player at the end of the season.

The 22-year-old has been one of the standout performers in the entire Championship under Marcelo Bielsa and would be a great addition to the Magpies’ squad.

Comparing White to Fernandez this season via WhoScored proves that the Leeds star would be a great upgrade should Bruce decide to launch a move for the defender.

Newcastle have always been solid in defence, so looking at their stats in possession really separates them, with White phenomenal on the ball. 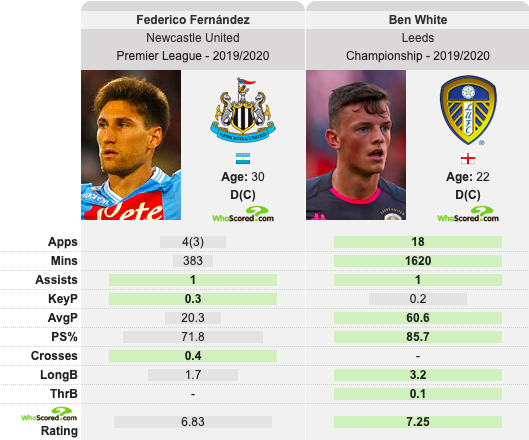 The 22-year-old has completed three times the amount of passes that Fernandez has averaged per game, as well as a significantly higher success rate.

Newcastle could do with a ball-playing defender who can bring the ball out from the back, and that is exactly what White is.

The Magpies’ interest in White could spell massive danger for Fernandez, who could be set to leave the club at the end of the campaign.