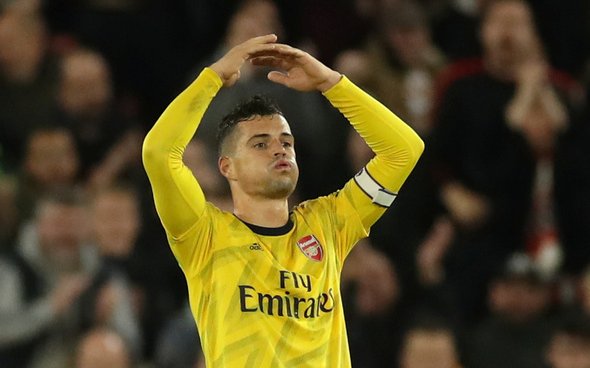 It remains to be seen how Arsenal’s decision to sack Unai Emery will affect Newcastle United’s interest in Granit Xhaka, according to The Athletic journalist Chris Waugh.

The reporter claimed via a live Q&A session on The Athletic’s website on Friday that the Magpies do hold a “genuine” interest in the 27-year-old midfielder, who made his first appearance for the Gunners since October in their defeat to Frankfurt on Thursday night.

Xhaka’s time at the Emirates appeared to be over under Emery with the Switzerland international being stripped of the captaincy and a change in leadership at the London club could bring about changes regarding the midfielder’s future.

However Waugh claims that it is too soon to see what affect Emery’s exit could have on Xhaka but Newcastle still remain interested in the ex-Basel man.

“The interest is genuine – if ambitious – because Bruce wants to sign a midfielder during the January window, one who he feels can bring greater energy to the engine room,” said Waugh.

“In terms of how Emery leaving affects things, it’s too early to tell. A new manager may decide that Xhaka is not in their plans, though he may also determine that he is a first-choice player.

“Although the Xhaka reports are genuine, I’ve been sceptical from the start that it’s one Newcastle can pull off. I remain so – but a midfielder is a target.”

Emery might have gone but the main issue with Xhaka was the treatment that he was getting from the fans. He has been constantly criticised by the Emirates faithful and was booed off in that game against Crystal Palace in October. Xhaka’s response to those boos led to him being dropped by Emery and losing the captain’s armband, so the Frenchman’s exit might not have any impact on his future. If Xhaka wants to leave then he’s going to want to leave regardless of who is in charge because the one thing that is consistent about football clubs are their fans. He could stay and try to prove the fans wrong and play his way back into their good books, but it just seems as though all bridges have been burnt between the player and the supporters. Xhaka might be a decent signing for Newcastle in January but Steve Bruce needs to look at getting his team to score more goals, rather than adding another defensive-minded midfielder.