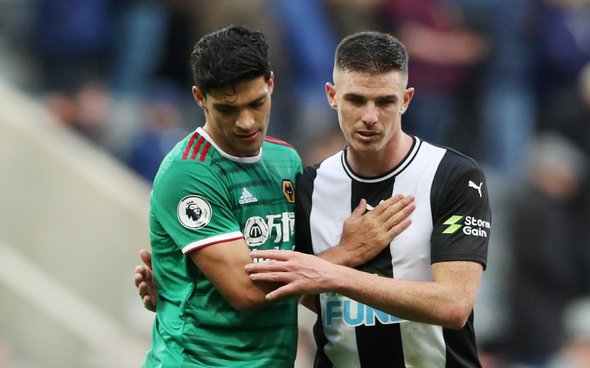 Newcastle United may end up in a win-win situation with defender Ciaran Clark based on the remarks of Republic of Ireland manager Mick McCarthy.

The international manager clearly took a gander at Clark during Newcastle’s 3-2 win over West Ham, and was impressed by what he saw.

“Ciaran Clark did his chances no harm as well on Saturday,” McCarthy told the Republic of Ireland’s official website.

“His goal was one of the highlights for Newcastle but he played well throughout the game and looked settled in their defence.”

McCarthy remarking on Clark hints that the 30-year-old centre-back could soon be back representing the Republic of Ireland, which is a positive for both the player and the Magpies.

The experienced defender hasn’t featured for his nation since McCarthy took over last year, and it would be very telling about how in-form he has been this season if he soon earns another cap.

The 30-year-old has been wowing for Steve Bruce’s side ever since the manager started to utilise him this season.

The centre-back has averaged an impressive rating of 7.08 across his four league outings and has even managed to contribute a goal to the cause after scoring against the Hammers on Saturday.

Clark has averaged 1.8 tackles as well 1 interception per match across his outings, as per WhoScored, to be a force at the back and has amazingly averaged 5.3 clearances per game in order to be an effective last line of defence.

Yet while Clark’s red-hot form is making him almost undroppable, it’s wasn’t that long ago, that it was easy to envision him leaving the club.

The veteran even admitted he considered his options in the summer as he wanted to play regular football.

“I had a chat with the manager towards the end of the window. He said he wanted to keep as many people here as possible to assess what he had.”

The Magpies have many centre-backs on their books, Federico Fernandez, Jamaal Lascelles, Fabian Schar, Florian Lejeune, and if Clark’s form drops then he could easily see his playing time dry up.

However, if Clark does enough just to get in McCarthy’s plans, the Magpies could end up being in a win-win situation if he ends up wanting to leave in either of the next two transfer windows.

As after all representing his nation will not only see him more likely to capture the attention of any potential suitors but being an active member of the Republic of Ireland’s squad will surely do his value no harm.

So with that in mind, if McCarthy does end up turning to Clark sooner rather than later, it will likely put the Magpies in a very nice scenario.