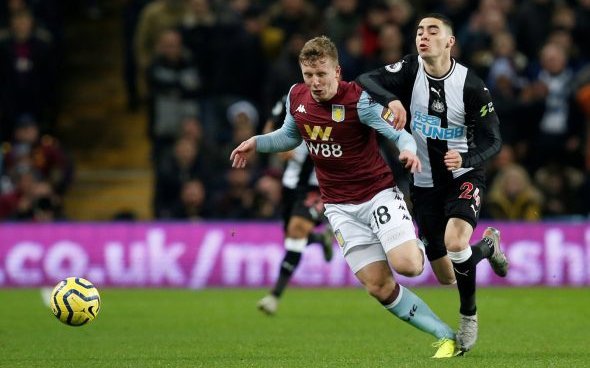 Will Miguel Almiron ever find the back of the net for Newcastle United?

The Paraguayan has been failing so much in the final third since arriving at the club in January, that it is getting harder for the Magpies’ man to put the blame on a lack of luck in front of goal.

Chances were few and far between but in recent games against Wolves, West Ham United, and Bournemouth, Almiron has failed to score despite having many openings.

It was a return to normality on Monday evening, with Almiron struggling massively to positively affect the game against Aston Villa.

Chris Sutton has slammed Almiron after Newcastle’s 2-0 defeat at Villa Park, claiming it was like the Magpies’ were playing with one less man for the majority of the contest on Monday evening.

“Almiron’s confidence is shot to pieces,” he said on Radio 5 Live, as quoted by the Chronicle.

“He came over, he showed promise, but I think Steve Bruce needs to bin him. Take him out and maybe give [Christian] Atsu an opportunity.

“It was like playing with a man down. We have all had bad games but he was super hopeless tonight.”

Sutton is spot on, the time has definitely come for Steve Bruce to place Almiron on the bench, and give someone like Christian Atsu the chance to come in.

The African has actually out-performed his teammate this season, delivering two assists, despite only starting four times in the Premier League.

Atsu has also completed 1.2 dribbles per game according to WhoScored, only Allan Saint-Maximin has averaged more, with Almiron only completing a poor 0.8.

Monday’s outing against Villa has to be the final straw for Almiron, who only completed 19 passes in his 79 minutes of action [WhoScored] and achieving a match rating of 5.95.

Sutton’s scathing criticism is fully deserving and Bruce should not be afraid to throw him on the bench, something which could act as a reality check to the South American moving forward.