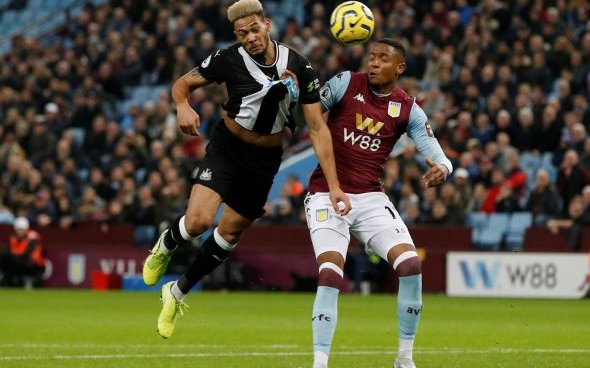 Chris Sutton has sympathised with Newcastle United forward Joelinton after the 2-0 defeat against Aston Villa on Monday evening.

The BBC pundit claimed that the Brazilian has lost all of his confidence in the final third, before claiming that no striker would wish to play as a lone striker in Steve Bruce’s system, even Alan Shearer.

Sutton did stick up for Joelinton claiming that he was once again extremely isolated at Villa Park and that it is very difficult for him to make an impact in front of goal.

“I think Joelinton has lost confidence,” he said on BBC 5 Live, as quoted by the Chronicle.

“I think he was extremely isolated and it was very difficult. He didn’t have his greatest game but who would really like to play up top? Even Alan Shearer wouldn’t want to play in this Newcastle team.”

The club-record summer signing has only found the back of the net once since joining from Hoffenheim but has started every Premier League game this season.

It is hard to argue against Sutton’s point, with Joelinton having to go through many battles with two central defenders before even finding slight pockets of space. The Brazilian was left bloodied at Villa Park and was given little service in the final third, with Bruce’s system making it harder for him to even touch the ball, never mind score. Joelinton may not have scored many, but it is hard to rack your brains and think of bucket loads of chances that he may have missed or even had at St James’ Park. The 23-year-old needs more bodies in and around him when the ball is sent his way, as he is still winning his fair share of battles in the final third. Joelinton has won an average of 5.3 aerial battles per game according to WhoScored, highlighting how he could be useful in setting up chances rather than finishing them off. Either way, it is clear that he needs a big boost in the near future, and Bruce must not be afraid to put someone like Dwight Gayle at the side of him to take the spotlight off of his summer signing.