Alan Shearer has taken to Twitter to send a message to Newcastle United youngster Matty Longstaff.

The Toon starlet was awarded October’s Premier League goal of the month for his stunning debut strike against Manchester United.

And Shearer was quick to hail the midfielder for his gong.

The United legend retweeted the Premier League’s announcement of the accolade, followed by three applauding emojis and one mimicking his trademark single-handed celebration. 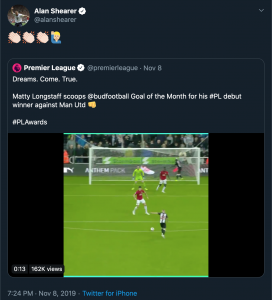 Credit where credit is due, it’s hard to recollect a Premier League debut as stunning as Matty Longstaff’s. The youngster was unreal against Manchester United back at the beginning of last month, and it wasn’t just his goal that caught the eye either. In that game, he made 42 passes, two interceptions, a tackle, played five successful long balls, and had just one unsuccessful touch, as per Whoscored. In short, he was sublime, and very good value for his match rating of 8.05. Things have dropped off a little for him in recent weeks, and the suspension of his brother Sean probably wasn’t the best thing that could’ve happened for his own momentum, but there is a real player in there, and if the likes of Shearer are singing his praises, then he surely has a wonderful future ahead of him.