Schar could start v Man City, Dummett to drop out 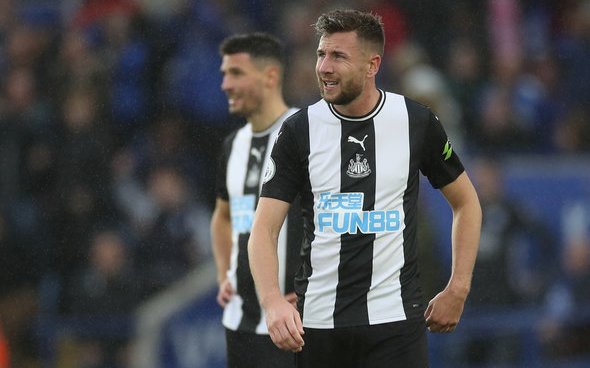 Steve Bruce could drop Paul Dummett and replace him with Fabian Schar for Newcastle United’s clash against Manchester City at St James’ Park on Saturday afternoon, according to The Athletic journalist Chris Waugh.

The reporter claimed via a live Q&A session on The Athletic’s website on Friday that while Florian Lejeune is close to returning to full fitness, it would be a surprise to see him in the starting line-up this weekend.

It is understood that Newcastle’s back-three against Man City could be Schar, Federico Fernandez and Ciaran Clark.

“I think Schar could well come in for Dummett, with Fernandez moving into the centre and Clark to the left,” said Waugh.

“In time, I think Lejeune will come back into the defence as well, but I’d be surprised if we see both start against Manchester City after respective periods on the sideline.

“They would both be in my first-choice back three, but that’s when they’re fully fit. I’m not sure Bruce believes Lejeune is ready yet – although he could surprise us all tomorrow!”

Dummett had an awful game against Aston Villa on Monday night and it would not be at all surprising if the 28-year-old is dropped for the clash against Man City this weekend. Dummett has only just returned to the starting line-up after a spell of being used on the bench with starts against Bournemouth and Villa. While he hardly stood out at the worst player on the pitch against Villa – almost everyone who played was useless – it is still the correct decision by Bruce to get Schar back into this team as soon as possible. Schar is without doubt the best centre-back that Newcastle have. He’s good on the ball and good at winning the ball back; he’s perfect for a three-at-the-back formation. Schar’s injury has not had too much of an impact on Newcastle’s results luckily, but he is still someone who needs to start whenever he is available to play.