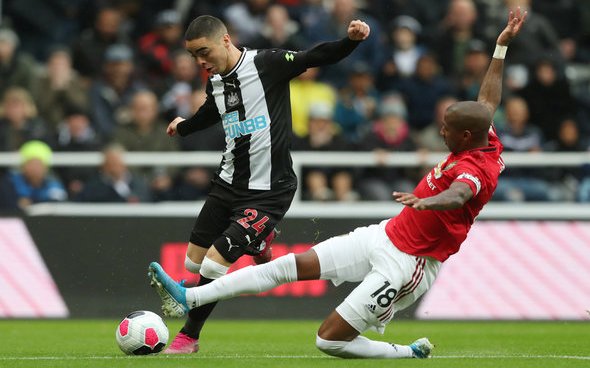 The Chronicle journalist Lee Ryder has claimed that Newcastle United are wrapping winger Miguel Almiron in ‘cotton wool’ at the moment.

The 25-year-old is still yet to score for the club, while he has been booked for simulation on occasion, and Ryder believes the club are attempting to protect him.

“I’m pretty sure Newcastle are wrapping him in cotton wool a bit at the moment,” he wrote in a Chronicle Q & A [Question 10] after being asked if the club had spoken to Almiron about his diving cautions.

“They won’t be telling him not to cause havoc in the box and he will gradually learn about life in the English game.”

The club refraining from telling Almiron not to cause havoc in the box is not the same thing as cautioning him about diving. Those two are completely different things. If the Paraguay international continues to be booked for simulation then he will eventually get sent off or pick up a suspension via accumulation of yellow cards. They don’t need to get him to change his overall game so that he stops diving, they just have to get him to stop diving! The two are not mutually exclusive. Yes, he will learn about the English game. We have seen so many players come over from abroad, a la Cristiano Ronaldo, and go down easily under the slightest of touches, before realising that that’s not going to do them any favours. That will eventually prove to be the case with Almiron as well, but it could happen quicker if head coach Steve Bruce has a word with him about the reality of life in the Premier League.