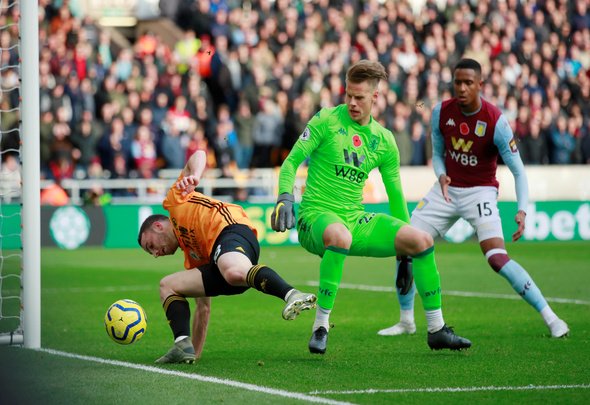 Aston Villa’s third-choice goalkeeper Orjan Nyland is primed to start his first-ever Premier League match on Monday night when Newcastle United travel to Villa Park, according to The Athletic.

The news outlet claims that number one goalkeeper Tom Heaton is a major doubt for the clash against the Magpies while second-choice Jed Steer will definitely miss out after he went off injured in the 2-1 defeat to Wolves before the international break.

Nyland, 29, came off the bench and conceded both goals at Molineux and it is now a strong possibility that the rarely-seen Norway international will start in between the sticks under the Villa Park floodlights on Monday.

There’s a reason why Nyland is the third-choice goalkeeper for Aston Villa. The former Molde goalkeeper had shocker after shocker for the Villans in the Championship last term and that ultimately led to Dean Smith signing Lovre Kalinic in January so that he could drop the hapless Norwegian. Steer eventually became the first-choice as the season progressed and Heaton was snapped up in the summer after promotion was clinched via the play-offs. It is good news for Newcastle that Nyland is very likely to start on Monday night. Although the 29-year-old has a point to prove at Villa Park, he’s still not as good as Heaton and Steer. Newcastle have won their last two matches but they still struggle to get goals and playing against a third-choice goalkeeper is bound to boost the likes of Joelinton, Allan Saint-Maximin and Miguel Almiron. Maybe the latter two will finally break their ducks on Monday.