The 24-year-old has seven goals in 11 appearances so far this season, and it is understood that the Magpies had representatives in the stands when he scored most recently against Nantes on October 19th.

The report also suggests that Leicester City had people watching the Senegalese striker. 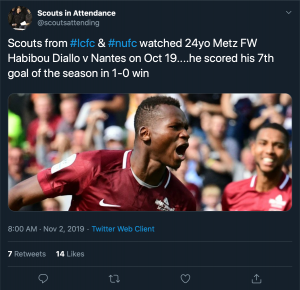 Newcastle United need to score more goals. You don’t have to be a rocket scientist to work that one out. With just six in the Premier League so far this season, they are the second lowest scorers in the division, and with just one goal in nine, Joelinton is hardly setting Tyneside alight. Is Diallo the man to help turn things around though? His goalscoring record speaks for itself, and he is averaging 3.1 shots per game, as per Whoscored – 1.6 more than Joelinton. Aside from that though, the Brazilian has actually had more successful dribbles and more key passes per game than him this season. That suggests that Diallo does not link up as well as the Toon man, and when a side is playing as poorly as Newcastle are at the moment, the last thing they need is a striker who is entirely reliant on the services of others.