Steve Bruce is predicted to make two changes to his starting line-up ahead of Newcastle United’s clash against Manchester City at St James’ Park on Saturday afternoon.

Bruce has confirmed, as quoted by the Chronicle, that DeAndre Yedlin has suffered a hip injury ahead of the match, meaning that he is a doubt to start against Man City and could be replaced by Emil Krafth in the right wing-back role.

Fabian Schar could also return to the defence with Paul Dummett being axed to the bench.

The Athletic journalist Chris Waugh has reported that this is a change that Bruce might make after Monday night’s 2-0 defeat at Aston Villa, where Dummett, 28, failed to impress. 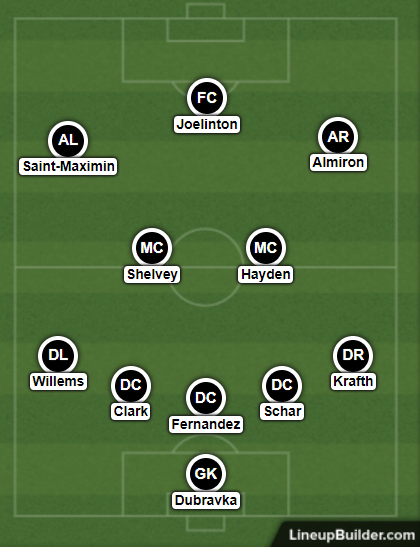 Martin Dubravka is expected to start in goals behind the back-three of Schar, Federico Fernandez and Ciaran Clark.

Javier Manquillo is someone who could replace Yedlin as the right-sided wing-back but summer signing Krafth appears to be ahead of the Spaniard in the pecking order and seems more likely to start. Jetro Willems is expected to line up on the opposite side of the defence.

Jonjo Shelvey and Isaac Hayden failed to impress on Monday but could be the two central midfielders that Bruce selects to start against Man City while the attack could also be unchanged with Miguel Almiron and Allan Saint-Maximin flanking centre-forward Joelinton.