Newcastle United are the sort of Premier League team that gets by on hard-work and good camaraderie within the group. Simply put, they don’t have enough talent to do otherwise.

With that said, it’s very important that any new players who are brought into the club are the right sort of personalities to fit the squad. That, and a few other reasons, is why the Magpies must steer clear of Arsenal midfielder Granit Xhaka.

The Times reported earlier this month that Steve Bruce’s side are keen to offer the Switzerland international a Premier League lifeline in January after the disintegration of his Gunners career recently.

Meanwhile, Swiss journalist Marcello Pelizzari told Il Milanista on Tuesday that Newcastle would be a ‘welcome solution’ for the 27-year-old, allowing him to stay in England.

The north east giants absolutely must ignore what Pelizzari is saying, here. Xhaka would be a huge mistake for the Magpies, and an expensive one at that.

Never mind the transfer fee involved, which would be around £15-20million, the Arsenal ace is reportedly on wages of £100,000-per-week [Source: Spotrac]. To put that into context, as per the same website, Newcastle’s top earner is Jonjo Shelvey on £70,000-per-week. So the club would need to shatter their wage structure to make room for a player is a known character risk.

Plus, Xhaka doesn’t have the talent to make up for his personality issues. He’s not an Eric Cantona, Paul Di Canio or even Hatem Ben Arfa, where you forgive their shortcomings because they have preternatural ability with the ball at their feet.

The statistics show that that isn’t the case with the former Borussia Monchengladbach man. As per WhoScored.com, Xhaka is averaging fewer shots, key passes and dribbles per game than Newcastle midfielders Shelvey, Isaac Hayden and Sean Longstaff.

He is more economical in his use of the ball – he is dispossessed the least and has the fewest unsuccessful touches of the group – but he doesn’t do enough with it, while he’s not as good a defensive midfielder as Hayden.

Given he was recency stripped of the Gunners’ captaincy for swearing at his own fans, perhaps this is one the Magpies should put on the back burner. 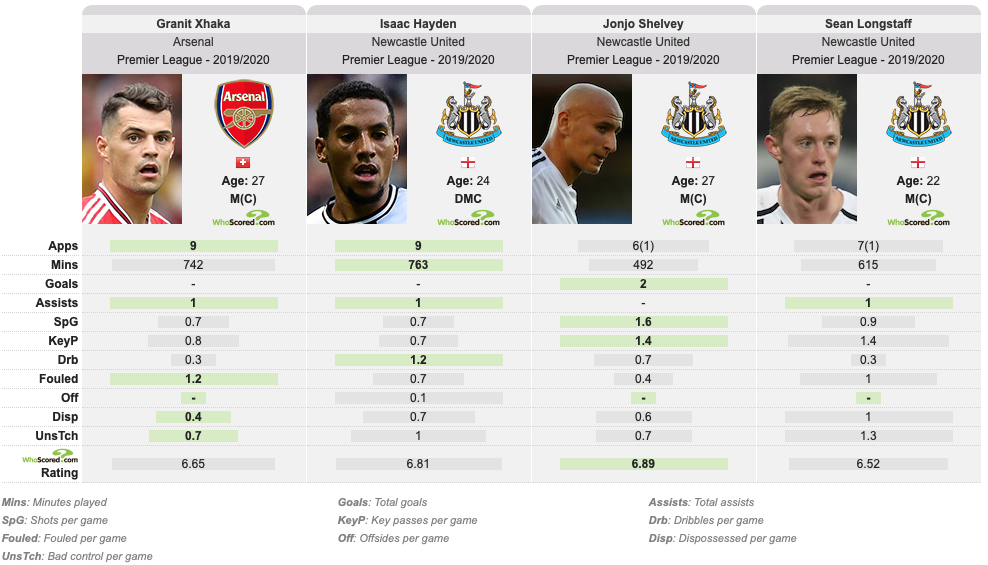