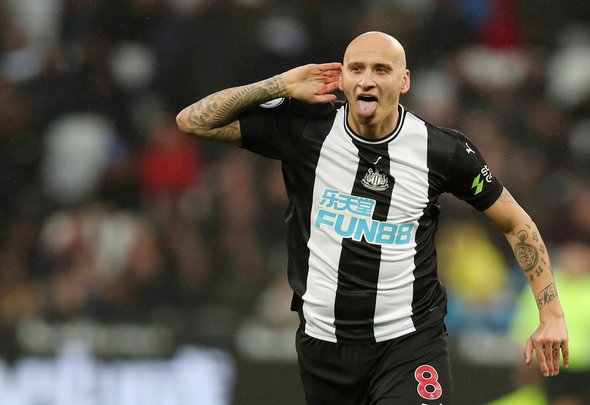 Jonjo Shelvey – yet again – has been blasted by a section of Newcastle United fans for his poor work-rate. In the first half against Aston Villa on Monday night, the 27-year-old failed to impress supporters on social media, with one even saying that he has seen players work harder in pub football. You can see where they are coming from. Shelvey is not known for bombing it around the pitch, going fully blooded into tackles and closing down every opposition player. But he does have a lot of grace and elegance about his game. On a couple of occasions in the opening 45 minutes, the former Liverpool midfielder showcased his superb range of passing and vision with some exquisite balls to his team-mates. Shelvey’s slow-paced style of play allows him to see the game differently to others and weigh up his options a bit better. It would be great to see him put in a lot more effort when Aston Villa are in possession of the ball in the second half though.

This is the Shelvey I can’t stand!

Sauntering around the pitch, trying Hollywood passes, not tracking back, not offering any support to Hayden!

This is why so many managers drop him! #NUFC

That's an awful set piece by Shelvey, has to do better with that ball in when we have had so little possession. #nufc

Sick of seeing Shelvey just moping about the pitch

Shelvey playing in quicksand out there #NUFC

This is a poor first 17, rushed, lack of press, no quality. Shelvey needs to wake up #nufc