Newcastle United have an unusually strong crop of central defenders at the club at the moment. With captain Jamaal Lascelles looking good this season alongside the ever impressive Fabian Schar, not to mention Ciaran Clark and Federico Fernandez, both of whom scored against West Ham at the weekend, this is a reliable and deep group of players. And that cohort looks all the stronger for the imminent return of Florian Lejeune. The Frenchman has been sidelined for some time with a knee injury, but all the signs are that he is on the cusp of a comeback. After playing for the U23s earlier in the week, Lejeune posted to his personal Twitter account claiming that he was back with the first team squad and supposedly “ready now”. That news will no doubt give Steve Bruce a selection headache, but there are certainly worse problems to have. Prior to his injury last season, Lejeune was averaging 2.1 tackles and 3.7 clearances per game, as per Whoscored. The year before that he managed a colossal 6.1 clearances per match. Factor in 6.8 successful long balls per game last term, and it’s clear that his return will not only sure up the Magpies’ defence, but also give them a decent option on the front foot too. This is great news. 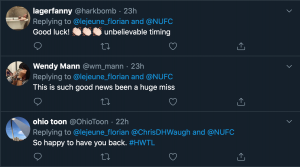 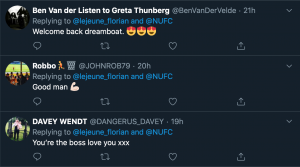