It’s fair to say that it’s been a pretty mixed season for Newcastle United up until this point. The Magpies have fluctuated between superb results – like beating Tottenham and Manchester United – and incredibly underwhelming performances – like taking a thrashing from Leicester City. In fairness though, their home form has been relatively consistent. After having lost to Arsenal on the opening day, they are unbeaten at St. James’ Park, going into the lunchtime kick-off against Manchester City. And that was point that manager Steve Bruce was eager to emphasise in his programme notes for that match – although he seemed to miss out a couple of key words. As per The Chronicle journalist Lee Ryder, Bruce wrote: “We have been unbeaten in the league since our opening day and since then our league form has quietly stacked up”. It could well be an unfortunate piece of phrasing, but it does give the distinct impression that Bruce is unaware of the fact that his team have been getting beat on the regular this season. Naturally, eagle-eyed fans jumped on the gaff straight away, with more than a couple of reminders to the contrary aimed at Bruce, who will no doubt be more careful with how he words things in the future. 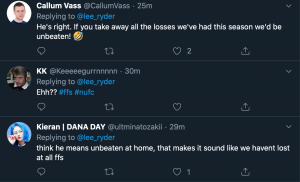