Andy Carroll has been raving about Joelinton on social media after Newcastle United’s record-signing impressed in the 3-2 win against West Ham on Saturday. Joelinton did not manage to get on the scoresheet but he assisted Ciaran Clark’s goal and on the whole, it was a top display by the Brazilian centre-forward. Carroll took to his personal Twitter account to rave about Joelinton on Sunday and while some fans were happy with the Geordie striker’s message, others thought it was “strange” or a bit “sarcastic” that he mentioned his team-mate not scoring a goal at the London Stadium. Carroll obviously didn’t mean anything like that, he is simply pointing out that a striker does not have to score a goal to have a big impact on the game. Joelinton was one of Newcastle’s best players at West Ham with the way he linked up with the rest of the attack. Hopefully there is more to come from the Brazilian ace.

When The Striker Plays Well The Team Plays Well!! No Goals 1 Assist Massive Performance From The Big Man!!
–
–
joelinton34 https://t.co/ykF5Yx95bi

Joe will only get better with the knowledge you have 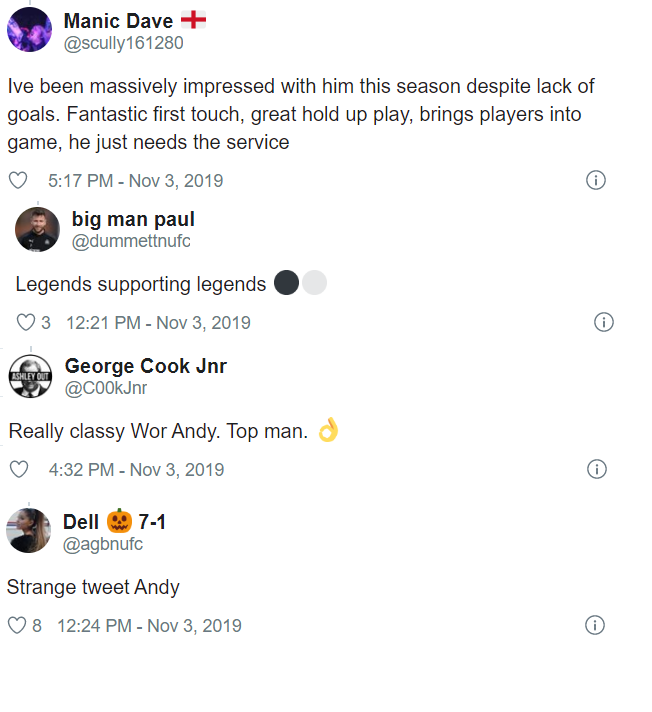