Saturday’s clash against Manchester City was always going to be a difficult one for Newcastle United. After all, the champions are the champions for a reason, and with such a large gap between themselves and Liverpool at the top of the table, they were always going to turn up to St. James’ Park with the bit firmly lodged between their teeth. And in the first half, when Raheem Sterling put the Blues in front, many Toon supporters must have thought that they were in for a hiding. Instead, their side fought back well, with Jetro Willems levelling things, but it was the display of Allan Saint-Maximin, as has so often been the case this season, that caught the eye. The Frenchman was lively and tricky throughout, and had Kyle Walker worried on more than one occasion. Perhaps that shouldn’t be a surprise, given that he has averaged 5.7 successful dribbles for the Toon Army per 90 minutes so far this season, as per Whoscored, and if he can just add some composure and end product to his game, then he could genuinely come to be regarded as one of the signings of the season. He showed exactly why again against City. 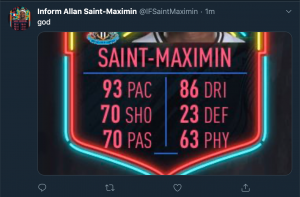