What a trip to London it was for Newcastle United who blew West Ham United away in the first hour of the game. Goals from Ciaran Clark and Federico Fernandez saw the Magpies go in at half-time two goals to the good, but in all honesty, it could and probably should have been much more. Jonjo Shelvey sealed the 3-2 win despite a late scare. Allan Saint-Maximin was a threat once again, and he really is getting better with each game that passes. Steve Bruce’s side have been missing pace and flair in the final third, and that is exactly what the Frenchman gives his side. The only thing missing from his near-perfect performance was his first goal for the club, but on that basis, it won’t take long for him to get off the mark in the North East this season. The 22-year-old will be vital if Newcastle are to survive this season, but he could also be the reason why the Magpies get so much more. Many Newcastle fans took to Twitter to heap praise on the winger, with the majority blown away by not only the impact he made on Saturday but ever since he arrived.

Nothing But Newcastle have rounded up the best reactions below: 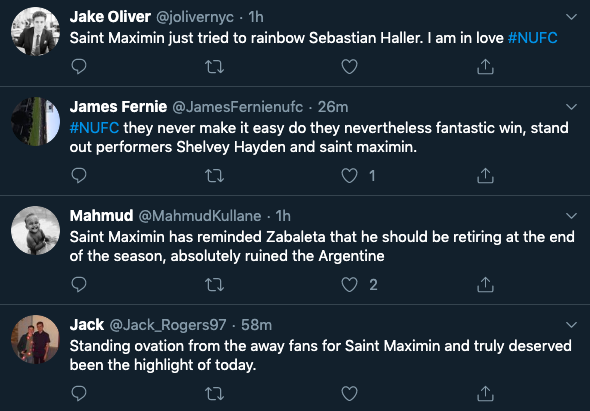