Newcastle United head coach Steve Bruce would be wise to make two changes and adopt a new formation for his team’s clash with Bournemouth on Saturday.

The Magpies are coming off one of their finest performances of the season against West Ham United last time out, yet Bruce would do well to tweak things slightly.

Indeed, with the game being at St James’ Park, the Toon boss should push his wingers forward to make it a 5-2-3 formation, rather than a 5-4-1, with Dwight Gayle and Javier Manquillo replacing Miguel Almiron and DeAndre Yedlin.

Those must the only alterations Bruce makes for this one, and while it could be risky to go so gung-ho against the Cherries, this is a line-up which could see Newcastle outgun the visitors at St James’ Park.

Goalkeeper Martin Dubravka is capable of the odd clanger, as he proved against Wolverhampton Wanderers recently, but he is also a tremendous shot-stopper, as he demonstrated against the Hammers last weekend. He should keep his place between the sticks here.

While Yedlin seems to be a favourite of Bruce’s, Manquillo is more defensively solid, which will be important in such an offensive formation. He must start at right wing back on Saturday, with Jetro Willems taking up residence on the left hand side.

Newcastle’s centre back trio have been performing excellently in recent weeks, and so Federico Fernandez, Jamaal Lascelles and Ciaran Clark should all keep their places against Bournemouth.

In central midfield, Jonjo Shelvey came into the team and very much delivered last time out. The England international will almost certainly start alongside Isaac Hayden in the middle of the park once again.

Up top, Allan Saint-Maximin must retain his spot out on the left. However, Joelinton should be shifted out to the right hand side to make room for Gayle, giving the attack more potency in front of goal. Almiron, meanwhile, will be able to come on late and feast on the tired Cherries defence. 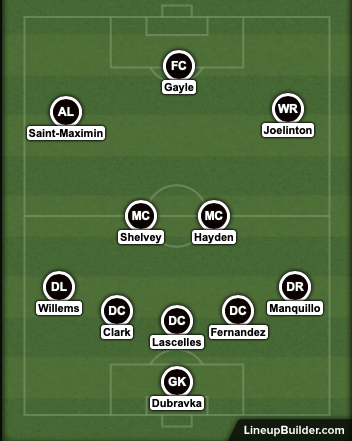