Newcastle United head coach Steve Bruce would be wise to make three changes to his team for the long trip to Aston Villa on Monday night.

Bruce has finally got the Magpies rolling, and they’ll be looking to make it three wins from three against the Villans. To do so, though, he will need to make a few alterations.

One is forced, with the injured captain Jamaal Lascelles likely being replaced by Fabian Schar. However, winger Miguel Almiron and striker Joelinton should also miss out.

Their places must be taken by Christian Atsu and Dwight Gayle. Those three changes would likely be enough for Newcastle to smash the hosts at Villa Park.

It would be a major surprise were first choice goalkeeper Martin Dubravka not to start between the sticks on Monday. The Slovakian would appear to be a front-runner to replace Lascelles as skipper, and he absolutely has to keep his place here.

Right wing back DeAndre Yedlin has returned from an early-season injury to produce some of his best football in years. He needs to start once again, as does Jetro Willems on the opposite flank.

Meanwhile, Schar should come in for the crocked Lascelles. Alongside him, though, must be the in-form duo of Federico Fernandez and Ciaran Clark.

Jonjo Shelvey and Isaac Hayden have now solidified themselves as Bruce’s first choice central midfield duo, at least for now. They will almost certainly keep their places on Monday.

Out wide, Allan Saint-Maximin needs to keep his place. He’s been excellent of late and is a must-start at the moment. On the opposite side, though, Atsu deserves another chance in place of the misfiring Almiron.

Joelinton has similarly disappointed this term. Now, with the international break hopefully having improved his fitness, it’s time to unleash Gayle. 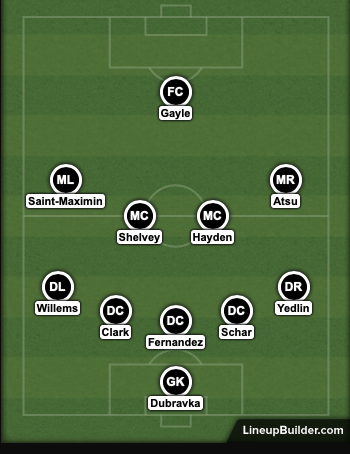