Muto could be sold 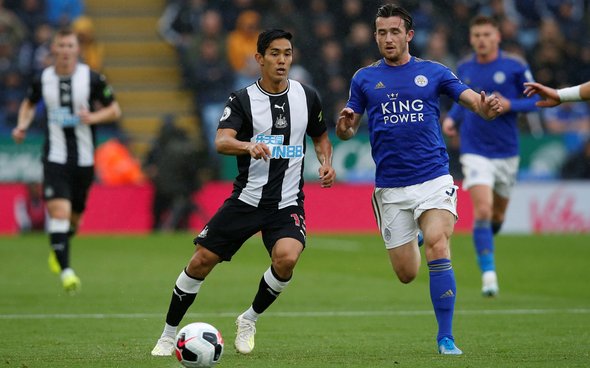 Newcastle United could look to sell Yoshinori Muto in January as a means of freeing up space in Steve Bruce’s Premier League squad, according to The Athletic reporter Chris Waugh.

The £54,000-a-week Japanese international [Spotrac] has played just 102 minutes of action for the Magpies this season, and finds himself behind Joelinton, Andy Carroll, and Dwight Gayle in the pecking order on Tyneside.

As a result, Waugh has suggested that he could be one player who the club potentially look to offload in the winter window.

Writing in a Q&A for The Athletic, he said: “In terms of January, I haven’t heard that Newcastle are looking to offload Muto but they will need to find space in their 25-man squad to sign someone else, so Muto could turn out to be one of the players they try and sacrifice if they do identify an alternative forward.” 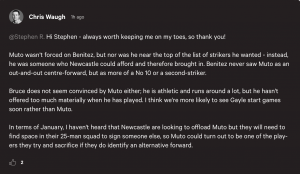 Things certainly don’t look too good for Muto at the moment. Some players just don’t click with some clubs, and while it is no direct slight on his ability as a player, he has struggled to get going in England. Admittedly, this season he only has one start and four substitute appearances to his name, but nonetheless, he has been operating at a below par standard. With just 0.2 shots, 0.4 successful dribbles, and no key passes per game, as per Whoscored, it’s difficult to see what he brings to the side, other than being willing runner. Perhaps things will turn around for him, and by no means is Waugh suggesting that he’s a definite goner, but at this specific moment in time, if the Magpies are serious about bringing in new players to help them avoid the drop, you would have to imagine that Muto will be one of the first who may get the shove.