Gary Lineker urged Ant and Dec to not watch Newcastle United play on Monday night as the Magpies lost 2-0 to Aston Villa in the West Midlands.

Geordie TV hosts Ant and Dec are currently in Australia for I’m a Celebrity… Get Me Out of Here but it seems as though they were a bit distracted by their team playing at the same time as their live broadcast.

Steve Bruce’s side were not in great form at all at Villa Park as they lost to the Villans and Linker has suggested it was probably a good thing they were unable to pay full attention to the match.

“I think you might be better off not watching the football, chaps,” said Lineker via his personal Twitter account during the second half on Monday night. 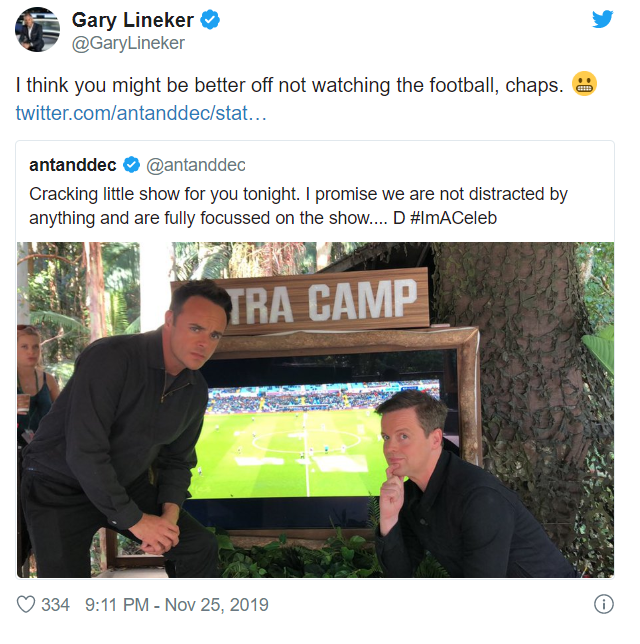 It was painful viewing for Newcastle supporters on Monday night. Bruce’s defence has looked quite decent in the last few weeks and the Magpies have also had a lot more luck up the other end of the pitch in the attack – except for the lack of goals by the front-three. But at Villa Park, everything just seemed to go back to how it was a couple of months ago when the Magpies were in the relegation zone. The defence was an absolute shambles, especially in the first half. There were a lot of fans who were not bothered about Jamaal Lascelles’ injury but it is clear that Newcastle missed their club captain in that match, even though he has not exactly been the stand-out defender this season. Everyone just seemed to take a major backwards step in terms of their performance. DeAndre Yedlin has been superb in recent weeks but looked out of his depth against Villa. Miguel Almiron offered zero threat and Jonjo Shelvey failed to show enough quality in his range of passing. What a miserable night.