Lejeune has chance to step straight in for Lascelles

Newcastle United made it back-to-back victories on Saturday with a 2-1 win over Bournemouth at St James’ Park, but it came at a price.

Magpies captain Jamaal Lascelles had to be withdrawn after just 20 minutes of the Cherries clash due to injury, and The Chronicle reported later on Saturday that the 25-year-old left the stadium on crutches and with his right leg in a brace.

He will undergo assessment from the club’s medical staff over the remainder of the weekend and could have to have a scan, and so there’s the possibility that the Englishman is facing a stretch on the sidelines.

If that is the case then it would represent a big blow to Steve Bruce’s side. However, luckily for the Newcastle boss, he has a ready-made replacement for Lascelles closing in on a return to the first team picture.

Florian Lejeune is now back playing after suffering another horror injury against Crystal Palace in April. He’s featured in a couple of games for the Magpies’ Under-23s side and is currently slated, as per the above Chronicle report, to play in a practice match behind-closed-doors over the international break, although he’s yet to play for the first team this term.

We all know how good of a centre half the Frenchman is, a classy operator who can both defend resolutely and bring the ball out from the back to initiate attacks.

The statistics from his 12-game stint last season suggest that he could fill in seamlessly for the Newcastle skipper. As per WhoScored.com, the 28-year-old averaged more tackles and interceptions per game than Lascelles has managed this campaign, while his average WhoScored rating of 6.95 is higher than Lascelles’ tally of 6.72. And he’s comparable to Lascelles in other categories, too.

So while it’s never a good thing to suffer an injury to a key player, Bruce is at least fortunate that Lascelles operates in a stacked positional group, and that he has Lejeune coming back. 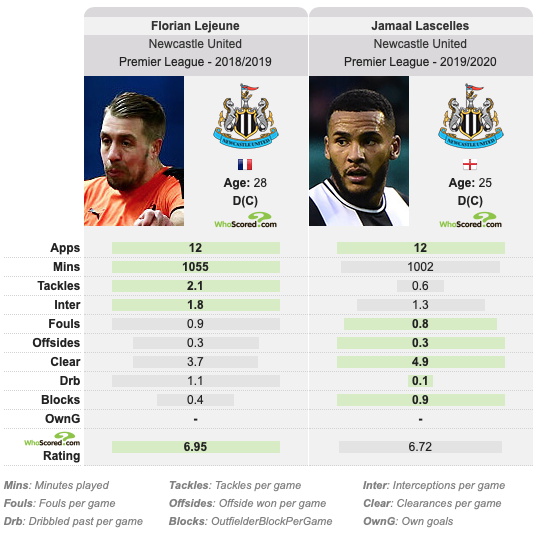