Lee on Longstaff brothers: ‘I love them both’

The Georgie-born duo have emerged as two quality options in the middle of the park for the Magpies over the past 12 months, and Lee is a big fan.

“I love them both,” he told The Chronicle. “When I first came up here Sir John Hall told us he wanted a team of 11 Geordies. It’s great to see a team of local lads.”

“We haven’t had many in recent years and it’s great to have them in.  And the thing is they are both very good footballers.”

There’s no doubt that the Longstaff brothers’ ascension to the Newcastle first team has been heart-warming to see for everyone on Tyneside. Every supporter loves seeing home-grown players come through the academy and go all the way to becoming first team regulars, and that’s perhaps even more the case with the Newcastle fans. So they are delighted that the two Longstaffs are key parts of Bruce’s plans, and the statistics from this season shows just why that is the case. As per WhoScored.com, Matty is beating his big brother in goals scored and average successful dribbles per game, as well as having fewer unsuccessful touches. Meanwhile, his average WhoScored rating per outing of 6.66 is superior to Sean’s tally of 6.52. On the other hand, Sean is ahead in assists and average shots and key passes per game, while he is fouled more often and dispossessed less. They are both top young players, make no mistake, and Newcastle are lucky to have them. 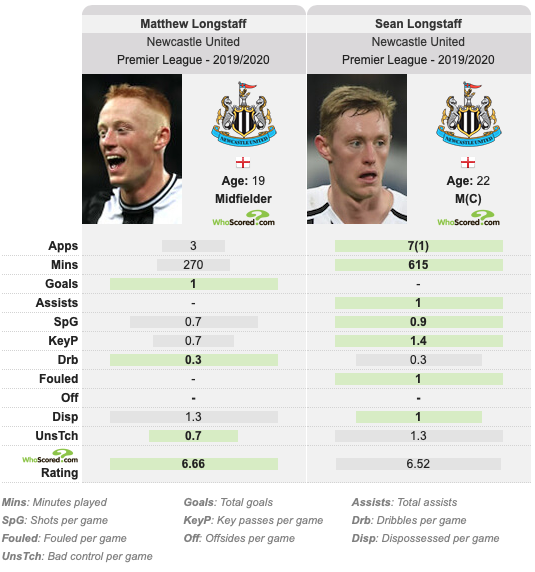