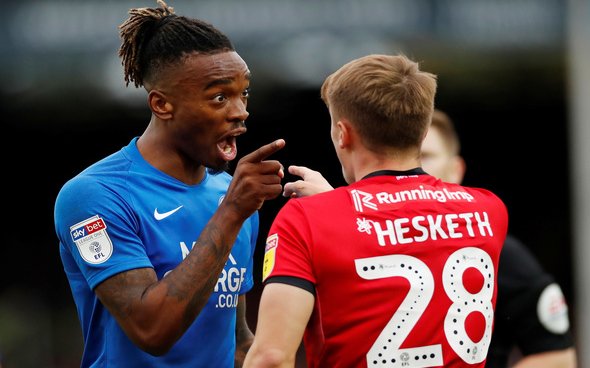 Newcastle United could be set to receive a “hefty” windfall if Peterborough cash in on in-form striker Ivan Toney.

The 23-year-old has been prolific in League One this season, scoring 12 goals in 17 appearances for the Posh and that has led to a report by the Sun claiming that the striker is attracting attention from the Premier League.

The newspaper reports that Bournemouth and Burnley are both prepared to pay £9million for the ex-Newcastle striker, who is valued at £13million by Peterborough, while Middlesbrough, Cardiff, Bristol City and Derby are also interested.

If Toney is snapped up by one of these clubs then that could lead to Newcastle being thrilled with the fact they included a sell-on clause in the deal that saw him head to London Road in 2018.

Peterborough chairman Darragh MacAnthony confirmed via his personal Twitter account last month that there is a “hefty sell-on” clause, that could see the Magpies become entitled to a certain percentage of whatever the Posh sell Toney for in the future.

Let’s say there’s a 10 per cent sell-on clause, that means that Newcastle could pocket £1.3million if Peterborough manage to sell Toney for their current valuation.

Even if the £9million that Burnley and Bournemouth are willing to pay is accepted, the Magpies could find their bank balance boosted by almost £1million for selling off one of their unneeded players last year.

Toney has done brilliantly at Peterborough and the Sun claims that the Posh feel as though they have one of the best young strikers outside of the Premier League.

While that is debatable, the potential thought of Steve Bruce’s transfer budget is welcome news for all on Tyneside.