If you ask any manager, they’ll say that selection dilemmas are a good thing. They prove that players are performing well, and it’s generally considered a nice problem to have.

However, there must be a part of them, sometimes, that wants their line-up decisions to be straightforward. Heading into Saturday’s clash with Bournemouth, Newcastle United head coach Steve Bruce could have been facing one such selection dilemma.

Instead, he has been spared an almighty headache for the Cherries game. That’s because the Evening Express reported on Friday that key Magpies duo Fabian Schar and Matt Ritchie are still out injured and will miss Saturday’s match.

While that’s not necessarily a good thing, far from it, it has made Bruce’s life a bit easier. If Ritchie had been back then it would have presented a tricky choice of whether to go for him or Jetro Willems at left wing back.

If Schar had returned to the reckoning, then the Toon chief would have been left with an even tougher decision: who to go with at centre back? Schar, Federico Fernandez, Jamaal Lascelles, Ciaran Clark or Paul Dummett?

Messrs Fernandez, Lascelles and Clark has helmed Newcastle’s three-man central defensive unit well in recent weeks, but it’s hard not to expect Schar to walk straight back into the starting line-up once he’s fully fit. But would Bruce really want to change a winning line-up, especially after Fernandez and Clark scored against West Ham United last time out?

Well, the reason would be that Schar is just that good. When you compare what the Swiss international has done this season to the aforementioned trio, you can see why Bruce might’ve been inclined to throw him straight back in.

As per WhoScored.com, the 27-year-old is averaging the most tackles and interceptions per game of the quartet, while he draws attackers offside the most as well.

Furthermore, he makes the second most clearances per outing and the most blocks, while his average WhoScored rating of 6.97 is second only to Clark’s tally of 7.08.

Still, this is now seemingly a problem that Bruce will only have to address after the international break. Is that good news or bad? It’s hard to say, but it certainly makes things easier for him against Eddie Howe’s men on Saturday. 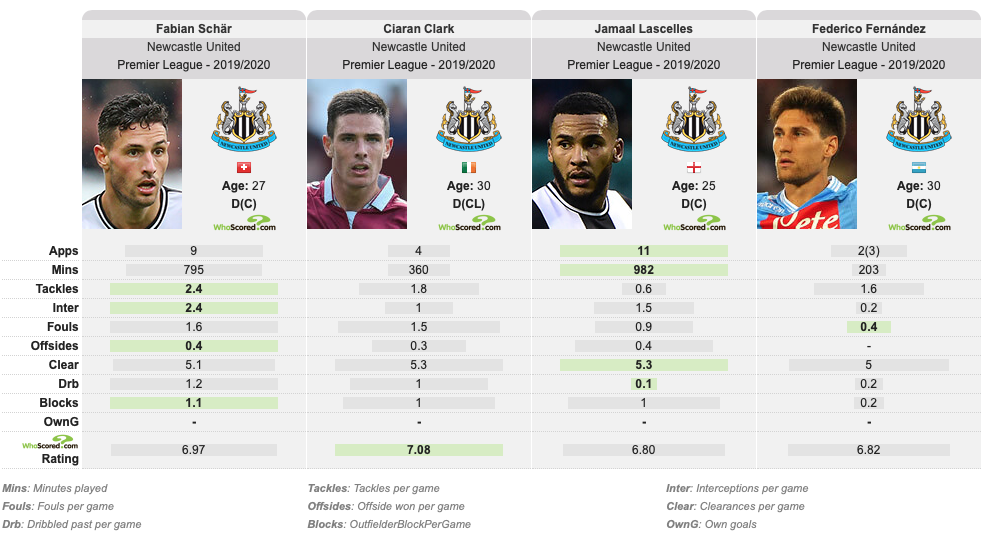