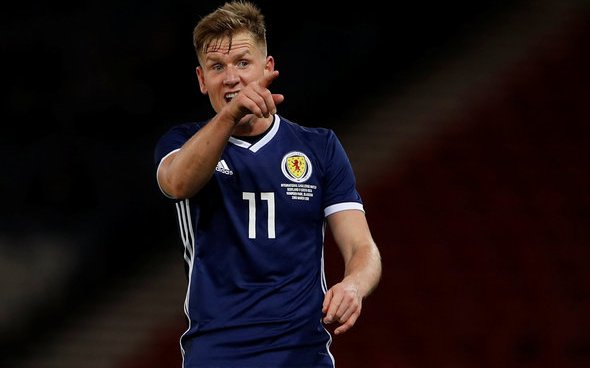 The Daily Mail reported on Monday that the 30-year-old has decided to call time on his international career, and Hutton believes not being appreciated may have been behind his decision.

“I’ve obviously played alongside him, I think he’s a fantastic player. So much energy, willing runner, run through a brick wall for you and quality so I know what he can give,” he told Football Insider.

“He obviously feels he’s a bit unloved when he goes up there, he doesn’t play all the time. Maybe he feels he can offer more but he feels he’s not getting the chance. When you get to a certain age, then you start thinking: ‘What am I going to put forward? I’ve got my family here, I’ve got Scotland there, I’m not really playing there so I’d rather use the days for X, Y and Z.’”

There appears to be little doubt that Ritchie had had enough of international football. Perhaps he feels that it’s wrong that a player of his quality has only amassed 16 caps for Scotland. He really should have had more, so perhaps that’s part of the reason why he has decided to call a day on his career with Steve Clarke’s side. He’s also going through some injury problems at the moment, as well, and so he probably feels that he needs to concentrate solely on his club football now that he is into his thirties. His international retirement, like West Ham United man Robert Snodgrass’ recently, indicates a changing of the guard for Scotland. They certainly need a reboot and so in some way they might welcome the duo’s decisions. Ritchie is a quality player, but he’s never been a regular starter for Scotland and so he’s decided to call it a day. Credit to him for his international career and now he can move on and put all of his focus into the Magpies.