Hope for Almiron after Paraguay strike 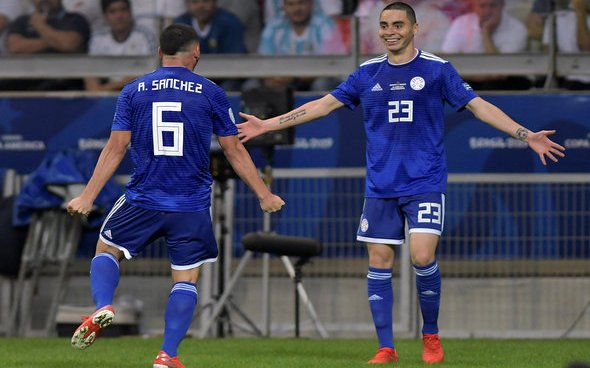 If there is one Newcastle United player who has appeared entirely devoid of confidence so far this season, then it’s winger Miguel Almiron.

The £20million man, who got off to such a bright start after joining from Atlanta United in January, has descended into despair recently as his goalless run for the Magpies has extended to the present day.

However, Newcastle fans are surely hopeful that the 25-year-old is about to burst into life after an encouraging run of games for his club was capped off by a goal for his country on Thursday night.

Almiron netted the only goal of the game in Paraguay’s 1-0 victory over Bulgaria, driving the ball home into the bottom left hand corner of the net from about 20 yards out. It was a terrific strike, the type that the Magpies faithful have been dreaming of seeing from this most polarising of players.

The Paraguayan is rounding into form – by his standards this season – at the moment, and if you take WhoScored ratings per game then he has registered two of his three best ratings of the campaign in the last three Newcastle games.

He really has improved, even if it’s only been incremental. The introduction into the team of the fit-again Allan Saint-Maximin has been huge for him, of course, although the Frenchman did inadvertently block a seemingly goalbound Almiron effort against Bournemouth last time out.

The sight of Almiron scoring on Thursday was a rare sight, even if it did come for Paraguay rather than Newcastle. Still, the signs are there that the former Atlanta man may finally be getting back to his best.