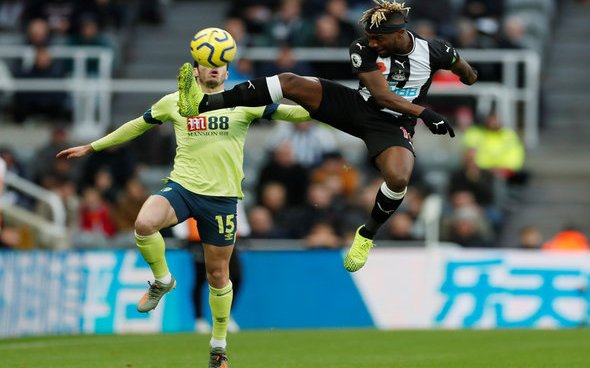 talkSPORT pundit Adrian Durham has heaped praise on Newcastle United winger Allan Saint-Maximin for his performance against Bournemouth on Saturday.

The Frenchman produced his second consecutive electric display as the Magpies battled to a deserved 2-1 victory over the Cherries, and Durham was very impressed by him.

“He’s electric,” he said on talkSPORT [11/11; 16:52]. “He’s so dynamic, he makes things happen. He’s a game-changer for Newcastle. He can keep them up, and he can contribute massively to the fans’ entertainment.

“I think he’s terrific. Back-to-back wins now and I wonder if the fans [are] starting to warm to Steve Bruce a little bit?”

For once it’s difficult to argue with what Durham has said. The shock jockey typically comes out with utter nonsense – he claimed earlier on Monday that Everton’s Tom Davies has the potential to be better than Liverpool legend Steven Gerrard – but he’s actually spot on with this one. Saint-Maximin was sensational on Saturday, producing a thrilling performance as Steve Bruce’s side battled back to defeat Eddie Howe’s men. The statistics demonstrate just how impactful the former Nice star was at St James’ Park. As per WhoScored.com, the 22-year-old had two shots, produced three key passes, four successful dribbles and achieved a WhoScored rating of 7.46, the third best tally of any Newcastle player. Saint-Maximin struggled to find form and fitness in the early part of the season, but is now looking like the electric talent the Magpies thought they were buying last summer. Let’s hope he can stay fit and keep this fine run of form going.