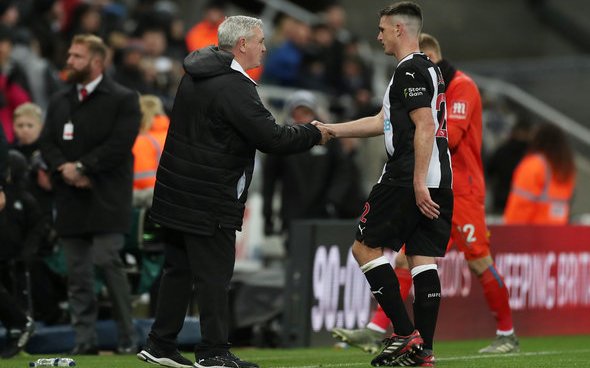 Newcastle United’s in-form centre back Ciaran Clark has revealed that Magpies head coach Steve Bruce told him last summer that his situation would be assessed in January.

The Republic of Ireland international started this season on the outside looking in at St James’ Park, but has become one of the team’s form players in recent weeks. Now, he’s revealed what Bruce told him about his future last summer.

“He wanted a chance to look at everyone in the squad, I had a chat with him, explained my situation and how I wanted to be playing games,” Clark told the Irish Independent. “I had a few years of being in and out of the team, it was hit and miss and I wanted to play football.

“He said to see how the first part of the season went and we’d assess it in January. He was fair with me, it was down to me to keep working hard and training and doing all I could to get back into the team and I have managed to do that.”

Well, you certainly feel that Clark’s January sit-down with Bruce will have a slightly different feel to it now than it would have done in September. Then the 30-year-old couldn’t seem to get anywhere near the Magpies first team. He was a perpetual substitute, watching from the outside as Fabian Schar, Jamaal Lascelles and Paul Dummett manned the three-man central defensive unit for Bruce’s team. Over the past five games, though, he has been a regular, and is arguably one of the team’s most in-form players along with Federico Fernandez and Allan Saint-Maximin. The statistics from this season show how well he has done of late. As per WhoScored.com, the 30-year-old has not only scored twice this campaign, but he is also averaging 1.4 tackles, 5.4 clearances and one block per game, while he is knocking 2.4 long balls forward per outing. Clark, like Fernandez, has been key at both ends of the pitch to Newcastle’s recent upswing in form, so you don’t imagine Bruce will be letting him go come the New Year.