While the Frenchman has lit it up for the Magpies in recent weeks, helping them to two wins on the trot, Joelinton is continuing to struggle up front. Now, Cascarino has had his say.

“Saint-Maximin has shown [that] he’s a bit like [Adama] Traore at Wolves, where he’s dynamic, pace, gets in behind teams, fans take a liking to him because of the way he plays football,” he said on talkSPORT [24/11; 08:21].

“Steve Bruce has spoken about this with Joelinton, that he needs time to settle in and find his way. It’s been hard for him.”

There’s no doubt that Saint-Maximin has settled in quicker at Newcastle than Joelinton. The big Brazilian has proved an effective foil for Saint-Maximin and Miguel Almiron in recent weeks, but he’s definitely not been a prolific goalscorer. It’s just one on the season so far for the former Hoffenheim man. But, as managed, there have been signs of encouragement for the Joelinton, Saint-Maximin and Almiron axis over the past few games. The statistics show, though, that it has undoubtedly been Saint-Maximin who has made a brighter start in a black and white shirt. As per WhoScored.com, the Frenchman outscores the 23-year-old in average key passes and successful dribbles per game, while he is being fouled more, caught offside less and is having fewer unsuccessful touches and being dispossessed less often. He’s also got a much better average WhoScored rating per outing of 6.93, compared to Joelinton’s tally of 6.72.  It’s about how they work together, though, and in that they have certainly looked better of late. 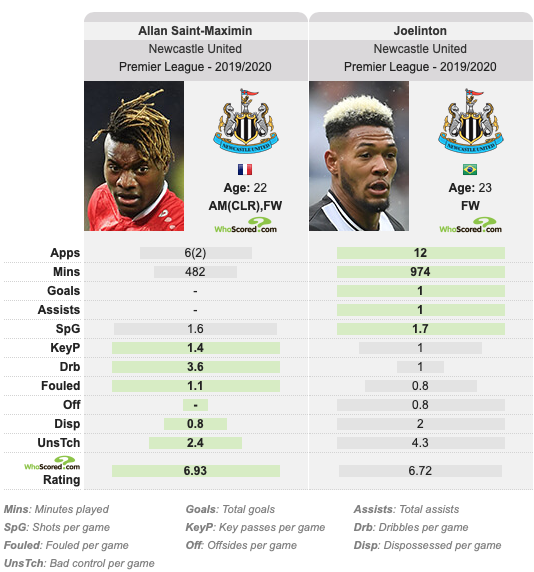