Bruce: Lejeune ‘champing at the bit’ to get back 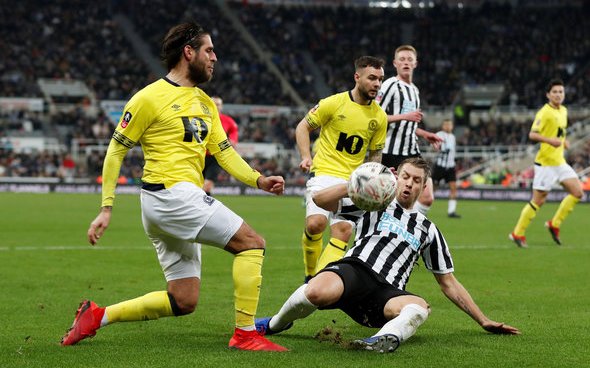 Newcastle United head coach Steve Bruce has said that Magpies centre back Florian Lejeune is ‘champing at the bit’ to get back in first team action.

The Frenchman hasn’t been seen for the north east giants this season, as he recovers from a serious injury suffered against Crystal Palace in April. However, the 28-year-old is now targeting the Aston Villa clash after the international break as his comeback game.

“Florian Lejeune is good,” Bruce said, as per The Chronicle. “It was a bit too early for this weekend but he’s come through the training schedule he’s been on and is fine.

“He just needs to get more minutes in him if we possibly can. He is back training, he’s champing at the bit.”

It’s been a long way back for Lejeune, but one he is familiar with now. He suffered a devastating injury in pre season before last season, only making his comeback around the turn of the year. He then got back in the team and performed very well, only to suffer the setback against Palace. However, he is now back fit again, and has played a couple of games for the Under-23s recently. There was no real point throwing him in against Bournemouth last weekend, not with the international break right around the corner. However, with Jamaal Lascelles’ injury suffered in that game leaving his immediate future up in the air, there is an opportunity for Lejeune to come straight back into the starting line-up against Villa. If that’s the case, the Magpies would be getting a valuable asset back, as the statistics from his performances last season show. As per WhoScored.com, the former Eibar man averaged 2.1 tackles, 1.8 interceptions and 3.7 clearances per game, to go with 46.9 passes per outing. Not a bad player to be getting back, eh?