Bruce claims Lejeune can only do so much training 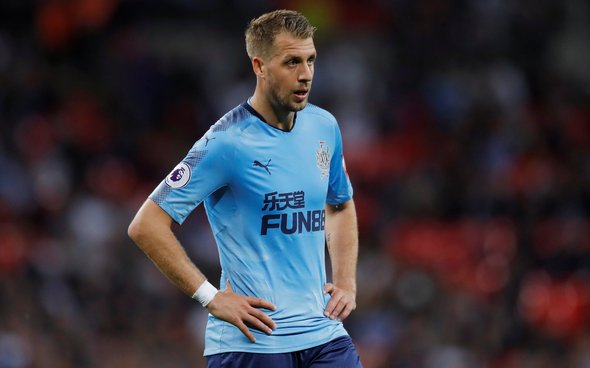 There is no hiding from the fact that Newcastle United’s defence has been their shining light this season.

The majority of their goals in the Premier League have come from their defence, with the likes of Jetro Willems, Ciaran Clark, Federico Fernandez, and Jamaal Lascelles all finding the back of the net.

Steve Bruce has had a number of decisions to make in his back five already this season, with a number of injuries making sure that he hasn’t been able to name a consistent line up from the back.

Fabian Schar and Florian Lejeune have been made available for the trip to Aston Villa on Monday evening, but as those two return from injury, Clark is set to miss out with a problem of his own.

Newcastle will be looking to build on their back-to-back wins against West Ham United and Bournemouth in the Midlands, and Bruce spoke about his defence in the build-up to the clash.

The Magpies’ boss heaped praise on Lejeune who has miraculously returned to full fitness despite only undergoing major surgery on his knee towards the end of last season.

“He’s ready to go,” he said, as quoted by the Chronicle.

Those comments by Bruce would suggest that Lejeune is set to feature against Villa on Monday, with the boss reiterating that there is only so much the Frenchman can do before being thrown back into the action.

The 28-year-old only managed to rack up 12 starts for the Magpies in the Premier League last season, but averaged 2.1 tackles per game according to WhoScored, the best numbers of his career so far.

Lejeune is surely more than ready to come back into the fold at Villa, and Bruce’s comments could suggest that the rarely-seen defender is set for a starting berth on Monday evening.