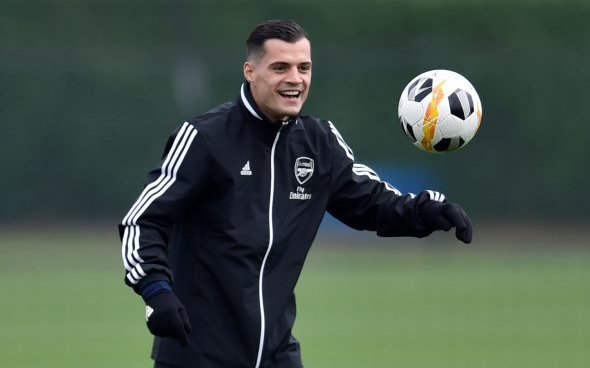 The Swiss international has been at the centre of a controversial week in north London, and was stripped of the Gunners’ captaincy after a coming together with fans during the 2-2 draw with Crystal Palace.

Subsequently, Newcastle have been linked with a shock swoop, as per The Times, and Sky Sports pundit Bent believes it could be a good move for the 27-year-old.

Speaking to Football Insider, he said: “At the minute he’s not playing games. If he went to Newcastle he’d be one of the main men, playing week in, week out. From his perspective, if he wants to play games then yeah, I would probably go there.

“If he goes there, does the business and does really well, they won’t have to pay that much for him. I reckon they’d have to pay between £8-10million to get him.”

This has certainly come out of left-field. Obviously the Xhaka situation is a tumultuous one, and it’s not unimaginable that he could leave the club sooner rather than later, but certainly it’s hard to see him rocking up on Tyneside. For one thing, the Magpies have an abundance of central midfielders. With Jonjo Shelvey, Isaac Hayden, and the Longstaffs in that area, they probably don’t need to be targeting reinforcements any time soon. Secondly, Xhaka probably wouldn’t add too much to the side. His pass completion rate of 86.5% in the Premier League so far this season, as per Whoscored, is good, but it’s not exemplary, and while he may make two tackles per match, he also commits 2.4 fouls. He’s a bit of a liability, and the last thing Newcastle need is a hothead on a reported salary of £100,000-a-week [Spotrac] to deal with. It’s got to be a hard pass on this one.