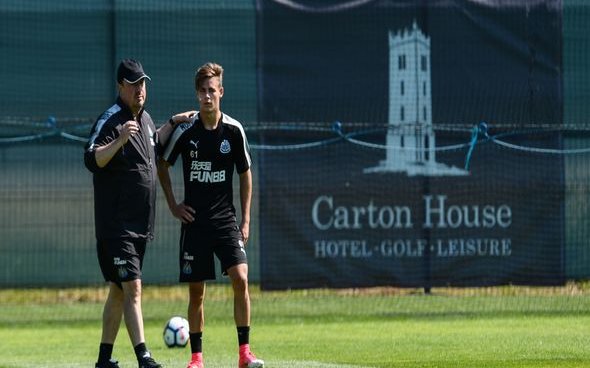 The 21-year-old winger grabbed the second goal of the game for the Magpies in the second-half to seal the win in the Premier League 2 against the club’s local rivals after Luke Charman had scored the opening goal from the penalty spot.

Redfearn claimed Fernandez was a real handful against Sunderland as he caused them all sort of problems on the left-wing, and pointed out that it was the Spanish winger who actually won the penalty for his side.

“Victor (Fernández) was a real handful for them and caused them all sorts of problems on the left and Tommy (Allan) on the right,” said Redfearn, as quoted by Newcastle United’s official website.

“It was fitting that it led through Victor to get the penalty. I thought he took his goal well too.”

It’s always nice to see Newcastle beat Sunderland at any level of football and Monday’s result was no different, even though Sunderland had to play a large chunk of the game with 10-men. It’s also good to see Fernandez impressing as the 21-year-old hasn’t had the easiest stint at the club in recent times. The 21-year-old’s 2018/19 campaign was disrupted through injury as a heel issue in October, as per the Chronicle, stopped him from featuring and then following that, Fernandez had to undergo hip surgery in order to address an issue. Yet it isn’t just injuries that would have frustrated Fernandez, Rafa Benitez’s exit from St James Park probably felt like a blow too. After all Chronicle journalist Ciaran Kelly previously claimed Benitez was a fan of Fernandez, and that suggests the Spanish manager may have given him a chance in the first-team sooner rather than later. It’s unknown whether Steve Bruce has had time to check Fernandez out after becoming Magpies boss in the summer, so you feel the 21-year-old still has some work to do in order to ensure he gets on the manager’s radar and moves closer to making his first appearance for the first-team. Yet wowing for the U-23s will certainly not hurt his chances of earning the chance to feature for the senior team.