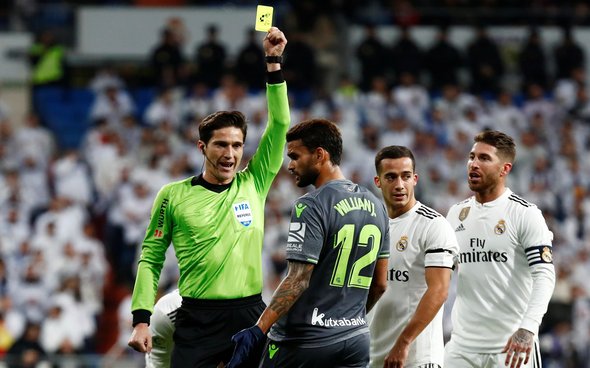 Newcastle United surely are kicking themselves over not succeeding in their previous reported pursuit of Willian Jose as the Real Sociedad attacker could have easily been a success at St James Park.

Spanish outlet Marca reported in the summer of 2018 that the Magpies had a bid rejected for the 27-year-old forward, but it seems that wasn’t the end of the story.

Jose lifted the lid on his plans for the future in a recent interview, and in the process confirmed that he did have a chance to go to Newcastle last year but that he ended up staying at Real Sociedad instead.

“For me, the best team is Real Madrid and then Barcelona,” Jose said, as transcribed & translated by Marca.

“I had an option to go to Newcastle on last year, I’m happy at Real Sociedad and I ended up staying.”

This turned out to be a smart decision for him, as after all Jose is currently enjoying life in Spain.

The Brazilian attacker scored 11 goals, while assisting five, in 34 appearances across all competitions in his 2018/19 campaign and he has already snatched four goals in his first nine league outings this season.

Jose has been clinical in his outings, as well as lively as he has averaged 1.4 shots per game (Source: WhoScored), this season and he would easily be utilised if he was currently at Newcastle as Steve Bruce’s side have only managed five league goals in total, and they could clearly do with someone confident about firing the ball home.

However, that’s not what will cause the Magpies to kick themselves over not getting Jose last year when they potentially had the chance, the fact he has admitted he wants Premier League football, one day, will surely see competition for his services increase.

After all, any English club will likely check out Jose as they know he has Premier League ambitions and because he’s currently in good-form and proving his worth.

The 27-year-old wasn’t so public about his future plans in 2018, and that likely helped the Magpies have a clear path to him.

Also when you consider that he is continuing to impress, then his value is only going to increase and he could end up being out of the Magpies’ reach as a result.

So with that in mind, the Magpies are probably cursing their luck they didn’t get a deal done for Jose as not only will his interview cause rivals to take notice, but it shows they had a chance of getting a player who’d be an asset currently if he had arrived in 2018.