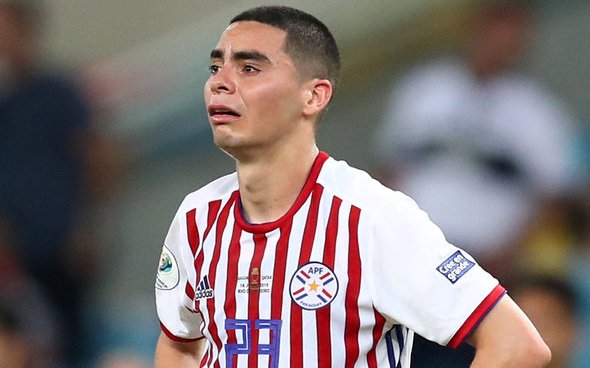 Former Premier League striker Noel Whelan has torn into Newcastle United winger Miguel Almiron after he was sent off for Paraguay on Thursday.

The 25-year-old was given his marching orders after 54 minutes in his country’s 1-0 defeat to Serbia, and BBC pundit Whelan believes he is really suffering at the moment.

“He’s got a lot of work to do, he’s obviously not gone away with international duty and got his confidence back that way, if anything it’s another kick in the teeth for him,” he told Football Insider. “So he’s gotta find it somewhere, you know when you’re down and lower than a snake’s belly, it tests the character in a player.

“Steve Bruce is probably going to keep faith with him but he’s gotta start repaying that as he has been brought in to do a job and he’s probably playing at 70% of what he is capable of, and that can only go on so long before there’s a change.”

There’s no arguing with the fact that Almiron is way down on confidence at this moment in time. The Paraguayan has been absolutely woeful for Newcastle so far this season, and will have hoped that he could regain some momentum on the international stage. However, quite the opposite has happened. He’s gone and got sent off, getting a second yellow card for diving. Diving for goodness sake! The South American is becoming a real concern for Steve Bruce and co., because this is a signing that simply hasn’t panned out so far. The statistics from this campaign tell us as much. As per WhoScored.com, the winger is averaging just one shot per game in the Premier League, while he’s failed to score in a Newcastle shirt thus far. Meanwhile, he’s been woeful in possession. Almiron is averaging two unsuccessful touches a game, while he’s being dispossessed 1.3 times. He is absolutely devoid of confidence and that was clear once again on Thursday.