Midlands giants West Bromwich Albion are ready to make a January move to bring Newcastle United striker Dwight Gayle back to the club, according to The Sun.

The newspaper claims that the Championship high-flyers want to sign the 29-year-old for a second time to try and boost their promotion push.

The Englishman excelled on loan at The Hawthorns last time out, scoring 23 times as the Baggies made it to the Championship Play Offs.

This is surely highly unlikely to happen, no matter how much West Brom want Gayle back. Newcastle head coach Steve Bruce has made it clear on multiple occasions that he wants to give the striker the chance to prove he can be a key contributor to the Magpies’ cause. With his team struggling so much for goals, is Bruce really going to ship his most natural goalscorer out of town? Don’t bother answering that. You can see why Bilic wants to get Gayle back, because the Englishman is a truly outstanding scorer at second tier level. As per WhoScored.com, last season Gayle averaged 2.4 shots and 0.8 key passes per game, while he bagged two assists to go with his 23 goals. Furthermore, he was fouled 1.5 times per outing on average, on his way to an average WhoScored rating per game of 7.13. Obviously he has the ability to fire West Brom back to the promised land of the Premier League, but Newcastle need to keep Gayle around so that they don’t swap places with the Baggies next season. 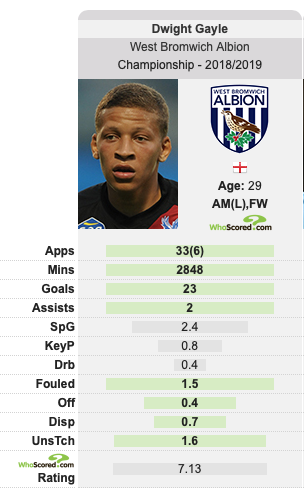