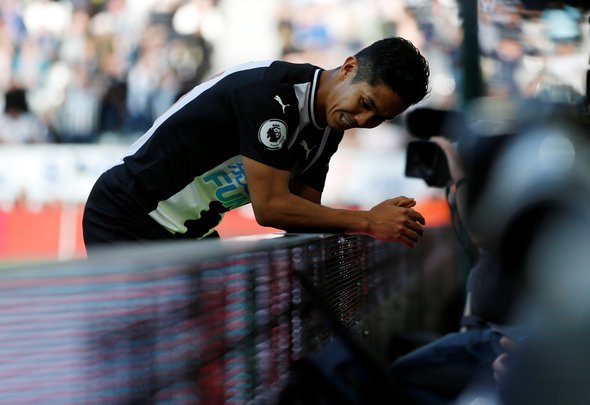 Newcastle United attacker Yoshinori Muto continues to be starved of playing time even though the Magpies have struggled up front all season.

The Magpies have only managed six goals in their first 10 league matches and no individual player has managed to score more than one, yet Muto who can play upfront continues to suffer the effects of Steve Bruce’s cold shoulder.

The 27-year-old has played a measly 101 minutes of Premier League action across the five matches he has played in, as per Transfermarkt, and didn’t make the squad for the clashes with Manchester United and Chelsea.

Granted it’s understandable why Muto hasn’t been featuring more as when you consider he has only scored two goals in 24 outings for Newcastle ever since joining, you have to question whether success will ever come to him at St James Park.

The forward has struggled to stand out in a good way in the minutes he has played this season in the league as he has averaged just 0.2 shots per game and has on average miscontrolled the ball 1.2 times per match. (Source: WhoScored)

Yet with the Magpies still struggling for goals, you could have thought there was an outside chance he could work his way into Bruce’s first-team plans more in the coming weeks.

However, Chronicle journalist Lee Ryder was asked during a question and answer session why Bruce hadn’t opted to change things up top more in the last few games with goals a clear issue.

The reporter pointed out Bruce had taken a look at Muto but hadn’t fancied him at all while explaining that the Newcastle boss hasn’t had the options in place in order to mix things up.

“I think he hasn’t had the options due to Gayle and Carroll coming back to fitness,” wrote Ryder in a Q & A for the Chronicle.

“He took a look at Muto but hasn’t fancied him at all.”

With this in mind and competition for places in Newcastle’s squad likely to be more fierce in coming weeks with Andy Carroll as well as Dwight Gayle hopefully 100% fit, Muto will likely see his playing time decrease even further if that’s possible.

This is because based on Ryder’s remarks, Bruce has given Muto a chance, he hasn’t taken it, so the Newcastle boss has moved on and no longer considers him an option.

With this in mind, for the sake of his own career, Muto needs to force an exit in January otherwise he’ll just stagnate and be forgotten about.

The forward, who earns £54,000-a-week currently (Source: Spotrac), managed to be good enough to feature 72 times for Bundesliga club FSV Mainz 05 previously, so someone out there will no doubt be willing to take a chance on him.

While the Magpies may want to hold onto Muto past January as Gayle and Carroll aren’t guaranteed to get fit even if they reach 100%, the Japanese forward must get out of St James Park for his own sake.