Matty Longstaff messaged Andy Carroll on Instagram to call him a hero after Newcastle United beat Manchester United 1-0 on Sunday.

Carroll had previously taken to his verified Instagram account after the game to point out that Longstaff had a dream Premier League debut due to scoring the winning goal against Man United.

“And that’s what dreams are made of!! 1-0,” wrote the Magpies forward, under a picture of him pointing at his teammate.

Despite Carroll not tagging his 19-year-old teammate, Longstaff quickly replied to the attacker’s post with one-word, “hero”, alongside the fistbump emoji via his personal Instagram account. 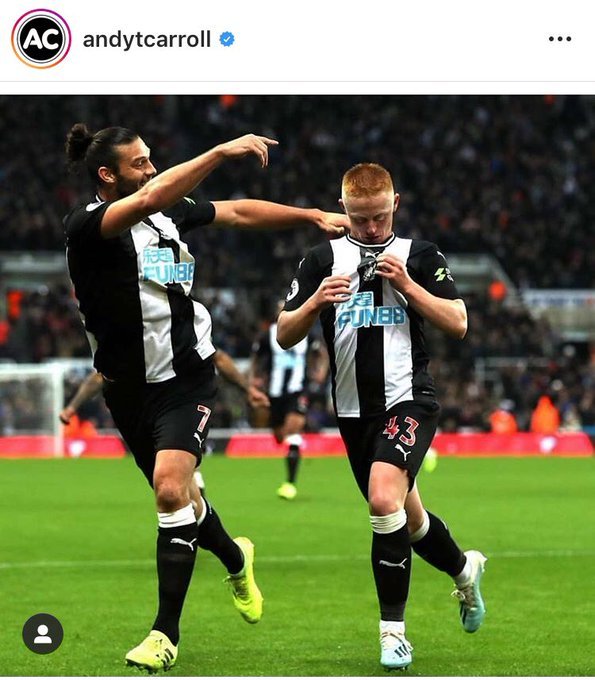 Longstaff rightly took all the headlines after capping off a fantastic performance against Manchester United by scoring a beautiful goal to get a valuable three points for Steve Bruce’s side, but Carroll also deserves the spotlight for his cameo display. The 30-year-old played 34 minutes of Sunday’s victory and made a positive difference to the game, the moment he stepped on the pitch. Carroll made his presence known by winning four aerial duels, only Joelinton won more, and looked like a lively threat to such a degree that Man United ended up fouling him twice just to stop him causing them further misery (Source: WhoScored). The veteran may not have scored a goal, though he did manage to have an attempt on goal, but the difference he made by just putting himself about was key to the Magpies’ narrow win. Also, Carroll coming onto the pitch also breathed new life into the St James Park crowd as there was no denying the inspirational roar that was heard when it was revealed he was being brought on. So with that in mind, while it may have only been a brief cameo appearance, Sunday’s game made it obvious what Carroll could bring to the table even when he’s not scoring.