Longstaff scored the only goal of the game during the Magpies’ 1-0 win over Man United during his Premier League debut for the club, and took to his personal Instagram to claim it doesn’t get much better than that.

“It doesn’t get much better than that,” wrote the midfielder.

Carroll appeared to agree with his young teammate as he sent a one-word message that simply said “priceless” via his verified Instagram account in response to Longstaff’s post. 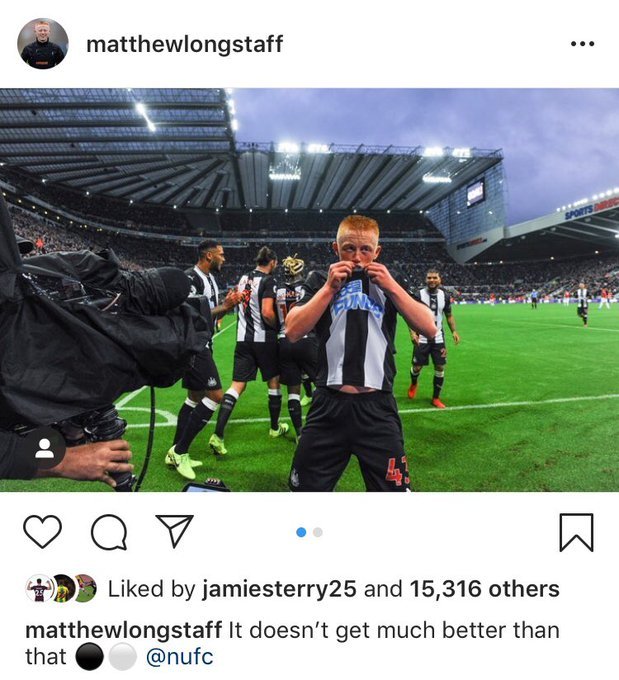 Carroll dedicated his Instagram post on the victory over Manchester United to Longstaff and got a called hero by the 19-year-old in response, but it seems the blossoming bromance between the two wasn’t done there. The veteran forward wasted no time in replying to Longstaff reflecting on his Premier League debut, and it’s nice to see an experienced player keeping an eye on the teenager.  After all, while Longstaff’s performance against Manchester United showed maturity, it must be mind-blowing to be thrown into the spotlight at St James Park in the way that he has. However, Carroll knows how to deal with fame as after all he’s had his fair share after playing 214 times in the Premier League and earning nine-caps for England so can clearly help Longstaff out. Also fair to say while Longstaff rightly stole the headlines on Sunday, Carroll also deserves plaudits for his display. The 30-year-old managed to win an impressive four aerial duels, despite only being on the pitch 34 minutes, and clearly got Manchester United flustered as they opted to foul him twice. (Source: WhoScored)